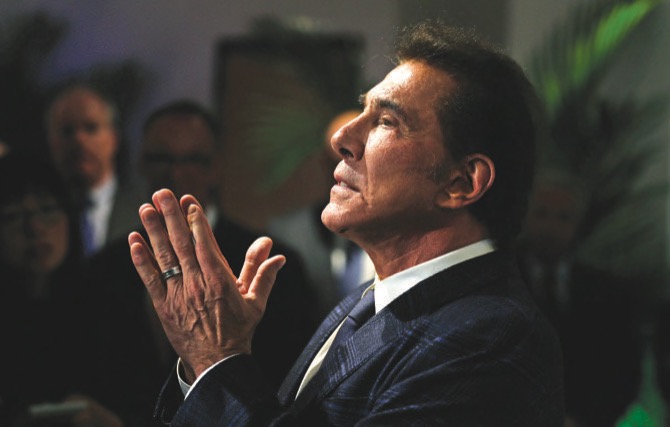 In this March 2016 file photo, Steve Wynn gestures during a news conference in Medford, Mass., regarding his proposed casino complex

The fate of Wynn Resorts’ USD2.6 billion Encore Boston Harbor resort is now in the hands of Massachusetts gambling regulators after they wrapped up a series of public hearings into what company officials knew about allegations of sexual misconduct against company founder Steve Wynn last week.

Massachusetts Gaming Commission Chairwoman Cathy Judd-Stein said at the close of the three-day inquiry that the panel will now deliberate privately and “take our time” making a decision on whether the Las Vegas company is still suitable to hold a state casino license.

Wynn Resorts hopes to open their nearly complete resort on the Everett waterfront in June.

The inquiry opened Tuesday after the commission released a more than 200-page report from its investigative unit that concluded company executives concealed and failed to take action on allegations against Steve Wynn for years. The five-member panel then questioned company leaders and outside experts over the course of two days.

On Thursday, company co- founder Elaine Wynn defended her decision not to disclose to Massachusetts regulators a $7.5 million settlement her ex-husband Steve Wynn made to a former employee who accused him of rape.

Steve Wynn has denied the sexual misconduct allegations, which were made over the years by several former casino workers. He told investigators in a statement that his “multiple relationships” with company employees were all consensual.

Elaine Wynn, who co-founded Wynn Resorts and is now the company’s largest shareholder, told regulators she relied on the company’s lawyers to decide what should be disclosed as the company sought a casino license in 2013.

She maintained that she told the company’s lawyer about the 2005 settlement in 2009 and had not been aware until recently about some of the other settlements her husband privately made, such as a $700,000 payment to a cocktail waitress in 2008.

Matthew Maddox, the company’s new CEO and close confidante of Steve Wynn, told regulators he also did not know about the specifics of some private settlements his former boss reached with former casino employees who had accused him of sexual misconduct until those details became public years later.

Maddox took over after Wynn resigned last year following a Wall Street Journal story detailing the allegations. But he’s been with the company since its founding and was best man in one of Steve Wynn’s weddings.

He said Wednesday he had been aware of the 2008 settlement as the company’s then-chief financial officer. But he maintained he was told the payment was to help a financially struggling employee and was on behalf of both Steve and Elaine Wynn.

Maddox said he was also made aware of at least one of a number of complaints made by spa workers at Wynn Las Vegas about Steve Wynn’s conduct during massages. Maddox, who was company president at the time, said he told the then-president of the casino to tell Steve Wynn to discontinue the behavior.

Maddox acknowledged he should have informed regulators about the allegations in 2018 because he and other company officials were aware of The Wall Street Journal’s reporting weeks prior to publication.

Company board members testifying Wednesday acknowledged they failed to investigate after learning in 2016 about a $7.5 million settlement Steve Wynn had paid to a former employee in 2005.

Board member Patricia Mulroy said the settlement first came to the board’s attention in 2016 during a lawsuit brought by Elaine Wynn, who was then in a bitter feud with Steve Wynn and the company board.

Mulroy said the company’s then-legal counsel assured them the incident was an “outlier” and that Wynn had personally paid the settlement with no liability to the company.

She also maintained the company’s legal counsel never told board members the allegation, from a former casino manicurist, involved a rape claim, and that company officials never made the board aware of other settlements.