Golf | Ryder Cup | They did it again: McIlroy, McDowell deliver for Europe in singles 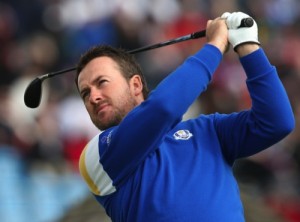 Europe’s Graeme McDowell plays a shot off the 3rd tee during the singles match on the final day of the Ryder Cup golf tournament, at Gleneagles

Rory McIlroy delivered the first point of the day in dominant fashion yesterday and Graeme McDowell won the second with a big comeback as Europe closed in on another Ryder Cup victory.
Holding a 10-6 advantage to start the day, Europe needed 4 points from the 12 singles matches to retain the cup and 4 ½ to win it outright.
Europe has won seven of the last nine Ryder Cups.
The No. 1-ranked McIlroy extended the lead to 11-6 by beating Rickie Fowler 5 and 4. Playing in the third match, McIlroy got off to a spectacular start, going 6 under after six holes to take a commanding lead that he never surrendered. The match ended at the 14th hole.
McIlroy had seven birdies and an eagle in his first 12 holes.
“It’s obviously very satisfying,” he said. “I knew what was expected of me and knew what I expected of myself. I was probably more up for this day than the two final days of the majors I won this year. I was just so up for it, there was no option but to win.”
McDowell, leading off the European order, came from 3 down to beat 21-year-old U.S. rookie Jordan Spieth 2 and 1, putting Europe ahead 12-6, two points away from keeping the trophy.
McDowell, who won four holes in a row to take the lead after the 13th, made a 6-foot putt at the 17th to close out the match. He dropped his putter and pumped his arms in celebration, as McIlroy cheered from behind the green.
“I’m just relieved to get a point on the board. The captain put a big role on me and I’m happy to deliver,” McDowell said.
Europe was up in three other matches, while the U.S. led in five. Two matches were all square.
Martin Kaymer also grabbed a big lead, going 4-up against Bubba Watson.
Another American rookie, 24-year-old Patrick Reed, got riled up in the second match against Henrik Stenson. After making a putt to halve the seventh, Reed shouted “Come on!” and put his finger to his lips to hush the European fans. The fans booed as he pumped his arms.
Reed made another birdie putt at the eighth, shouted and pumped his fists again. He and Stenson were all square after 17.
The U.S. faced the same 10-6 deficit that the Europeans overcame two years ago with a stunning Sunday rally in the “Miracle of Medinah.” The Americans came back from 10-6 down themselves to win in Brookline in 1999.
“We can’t be complacent,” European captain Paul McGinley said before play began. “You only have to look back two years ago what happened on away soil. We all see how quickly it can turn around.”
The U.S. hasn’t won on European soil since 1993 at The Belfry.
“You might think that it’s a given that the Europeans are going to win,” U.S. captain Tom Watson said. “But I sure as hell don’t.”
The Europeans seized command on Saturday afternoon, winning three of the foursomes matches and halving the fourth. It was the second day in a row Europe grabbed 3 1/2 points from the alternate-shot matches.
The grandstand at the first tee was packed Sunday with flag-waving fans, mostly Europeans, who broke into soccer-style songs and chants.
When McDowell and Spieth arrived, they chanted: “You’ve got Big Mac, we’ve got G-Mac.”
Former Manchester United manager Alex Ferguson was at the first tee to greet McIlroy, a huge United fan. Ferguson, a Scot who is Britain’s most successful soccer coach, gave the European team a pep talk earlier this week.
Amid a raucous atmosphere at the first tee, McDowell and Spieth both hit their opening drives down the middle of the fairway. They halved the first hole. Stephen Wilson, Sports Writer, Gleneagles, AP