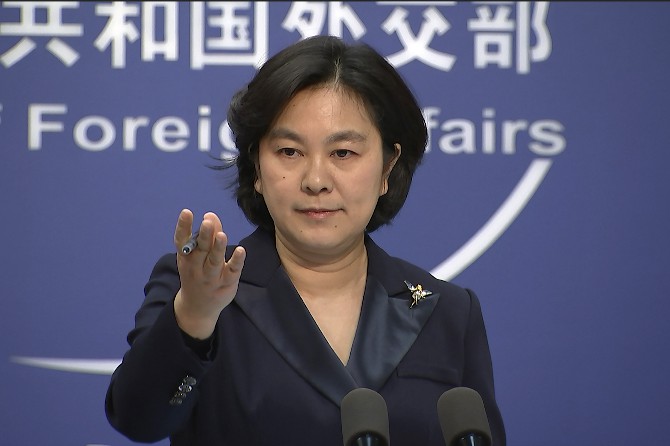 China’s Foreign Ministry described outgoing U.S. Secretary of State Mike Pompeo yesterday as a “doomsday clown” and said his designation of China as a perpetrator of genocide and crimes against humanity was merely “a piece of wastepaper.”
The allegations of abuses against Muslim minority groups in China’s Xinjiang region are “outright sensational pseudo-propositions and a malicious farce concocted by individual anti-China and anti-Communist forces represented by Pompeo,” spokesperson Hua Chunying told reporters at a daily briefing.
“In our view, Pompeo’s so-called designation is a piece of wastepaper. This American politician, who is notorious for lying and deceiving, is turning himself into a doomsday clown and joke of the century with his last madness and lies of the century,” Hau said.
Pompeo’s announcement earlier doesn’t require any immediate actions, although the U.S. must take the designation into account in formulating policy toward China. China says its policies in Xinjiang aim only to promote economic growth and social stability.
The U.S. has previously spoken out and taken action on Xinjiang, implementing a range of sanctions against senior Chinese Communist Party leaders and state-run enterprises that fund repressive policies in the vast, resource-rich region. Last week, the Trump administration announced it would halt imports of cotton and tomatoes from Xinjiang, with Customs and Border Protection officials saying they would block products from there suspected of being produced with forced labor.
Many of the Chinese officials accused of having taken part in repression are already under U.S. sanctions. The “genocide” designation means new measures will be easier to impose.
The move is the latest in a series of steps the outgoing Trump administration has taken to ramp up pressure on China over issues from human rights and the coronavirus pandemic to Taiwan, Tibet, Hong Kong and the South China Sea. China has responded with its own sanctions and tough rhetoric.
China has imprisoned more than 1 million people, including Uighurs and other mostly Muslim ethnic groups, in a vast network of prison-like political indoctrination camps, according to U.S. officials and human rights groups. People have been subjected to torture, sterilization and political indoctrination in addition to forced labor as part of an assimilation campaign in a region whose inhabitants are ethnically and culturally distinct from the Han Chinese majority.
The Associated Press reported on widespread forced birth control among the Uighurs last year, including the mass sterilization of Muslim women, even while family planning restrictions are loosened on members of China’s dominant Han ethnic group.
China has denied all the charges, but Uighur forced labor has been linked by reporting by the AP to various products imported to the U.S., including clothing and electronic goods such as cameras and computer monitors.
James Leibold, a specialist in Chinese ethnic policy at La Trobe in Melbourne, Australia, said international pressure appears to have had some effect on Chinese policies in Xinjiang, particularly in prompting the government to release information about the camps and possibly reducing mass detentions.
“So hopefully we’ll see a continued continuity with regards to the new (Joe Biden) administration on holding China to account,” Leibold said in an interview. MDT/AP