‘Guardians’ is irreverent but not enough 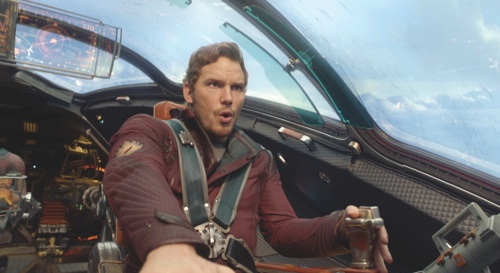 Chris Pratt in a scene from “Guardians Of The Galaxy”

At the height of their powers, our overlords at Marvel have deigned to prove, like an emperor tolerating a court jester, that they do, in fact, have a sense of humor.
The Marvel universe, of course, isn’t entirely lacking comedy, as we’ve seen in “Iron Man” and “The Avengers.” But on the whole, the Marvel kingdom is built on an unshakable foundation of self-seriousness. The comic book studio seems to fear that if the solemnity of its fiction isn’t diligently guarded, people might start questioning whether all these men in spandex merit quite so much attention.
Yet “Guardians of the Galaxy,” a 3-D space opera about a ragtag crew of mercenaries, is Marvel’s most irreverent film yet, and has a welcome, slightly self-mocking tone that dares to suggest intergalactic battles over orbs might actually be a tad silly. 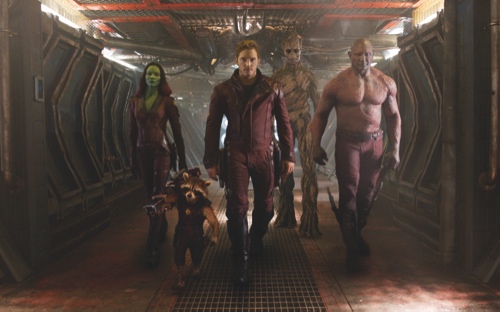 This is all very much to the good, but the problem with “Guardians of the Galaxy,” directed by James Gunn, is the weakness of the comedy it wears so proudly. It takes more than a soundtrack full of ’70s tunes, a talking raccoon and a few gags about “Footloose” to be funny. It’s “zany” in quotes.
As if demonstrating its tonal distance from Marvel’s other planetary bodies, “Guardians of the Galaxy” takes place at the far reaches of space, where we find Peter Quill (Chris Pratt) skipping along on an abandoned planet. He removes his mask, presses play on a Walkman and does something normally sacrosanct in Marvel-land: He dances. Blaring is the irresistible 1974 hit “Come and Get Your Love” by Redbone, the first of many such old radio hits.
The music, as we learned in the prologue, is from a mixtape given to Quill as a child by his cancer-stricken mother shortly before her death. Distraught, he rushes outside only to — in quite the double-whammy — be beamed up by a spaceship.
Twenty-six years later, Quill is a Han Solo-like scavenger who stumbles across a silver orb also sought by some powerfully evil forces: Ronan the Accuser (Lee Pace, obscured by makeup but still a severe presence) and his boss, Thanos (Josh Brolin). The warm spirit of “Guardians” owes much to Pratt, the guileless, formerly doughy “Parks and Recreation” star; his casting in inspired.
The resulting scrum for the orb introduces several more seekers: the green-skinned Gamora (Zoe Saldana), the hulking Drax (Dave Bautista) and a CGI odd couple: a bitterly sardonic raccoon named Rocket (Bradley Cooper) and his sidekick, a talking tree called Groot (Vin Diesel) who looks like he sprouted from “The Lord of the Rings.” All reluctantly unite like a sarcastic “Dirty Dozen.”
The Guardians, who were first introduced in a 1969 comic, are far from Marvel’s star players. But their not-primetime-player status is freeing to Gunn, whose 2010 comedy “Super” starred Rainn Wilson as a wannabe crime fighter. He wrote the film with Nicole Perlman, clearly aspiring for a rollicking adventure in the mold of “Indiana Jones” or “Star Wars,” which the movie’s poster evoked.
But the film is terribly overstuffed and many of the jokes get drowned out by the special effects. Presumably awaiting meatier work sequels to come, fine actors like Glenn Close, John C. Reilly and Benicio Del Toro come and go with just a few lines. (How can a movie seeking humor in outer space not utilize Reilly?)
The pervasive movie references detract from the stab at freshness, and “Guardians” depends all too much on the whimsy of ’70s anthems for an original beat. Others, eager for any playfulness from Marvel, will surely be more excited by “Guardians of the Galaxy.” To them I quote Solo: “Laugh it up, Fuzzball.”

“Guardians of the Galaxy,” a Walt Disney Studios release, is rated PG-13 by the Motion Picture Association of America for “intense sequences of sci-fi violence and action, and some language.” Running time: 121 minutes.
Two stars out of four.