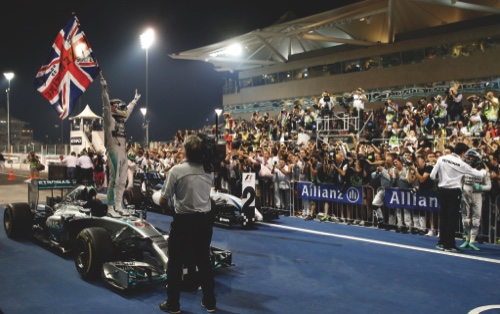 British driver Lewis Hamilton clinched his second Formula One title in style with victory at the season-ending Abu Dhabi Grand Prix yesterday, with title rival Nico Rosberg drifting out of contention after failing to recover from a poor start.
Hamilton, the 2008 F1 champion, entered the race with a 17-point lead over his Mercedes rival Rosberg, needing only a top-two finish to guarantee the title.
“Woooooo-hoooooo, world
champion I can’t believe it! Thank you so much guys,” Hamilton screamed over race radio, before grabbing a Union Jack flag and waving it above his car as his mechanics celebrated wildly.
He kept his helmet on for several minutes, appearing to wipe away tears, as the emotion of his hard-fought championship win started to sink in.
Rosberg started from pole position and, with double points on offer, could have taken his first F1 title with a win providing Hamilton finished third.
That dream scenario lasted three seconds — the time it took Hamilton to overtake Rosberg, whose race turned into a nightmare. He eventually finished 14th.
Brazilian driver Felipe Massa crossed the line in second place ahead of his Williams teammate Valtteri Bottas.
As a dejected Rosberg climbed out of his car, Hamilton rushed over to hug his girlfriend Nicole Scherzinger, who was in tears as she gave him a kiss, and Hamilton then jumped up and down with his Mercedes mechanics in a group hug.
Hamilton joins British drivers Graham Hill and Jim Clark with two F1 titles, with only Jackie Stewart ahead of him on three.
He won 11 races to Rosberg’s five overall this season. Tellingly, the German driver failed to make the most of pole, having bettered Hamilton 11-7 in qualifying.
His other title was also decided on the last day, when he did just enough to beat Massa by one point at the season-ending Brazilian GP.
That never looked like being repeated in Abu Dhabi, despite Rosberg’s brash pre-race talk of pressuring Hamilton into making mistakes.
In the final moments before the start, Rosberg stared blankly ahead in intense concentration mode, while Hamilton’s helmet visor was already down.
Rosberg made the worst possible start, seemingly rooted to the spot, while Hamilton showed phenomenal acceleration.
“It was a good start, like a rocket. It was probably the best start I’ve ever had. The car was fantastic and we really got it spot on for the race.”
The sublime passing move gave him complete control, and put the onus on Rosberg — his childhood friend and teenage go-karting rival — to match his pre-race fighting talk with some aggressive driving.
It never happened.
After 10 laps, Hamilton was already several seconds ahead and took the opportunity for a first pit stop.
Rosberg’s race went from bad to worse, as he drifted 14 seconds behind with half the race gone and snapped at his team engineers over race radio to “investigate why” he was losing so much speed.
Hamilton came in for his second stop on lap 32 and was still just ahead of Rosberg when he came out, as Massa briefly went in front.
With his hopes fading, Rosberg started to panic, trying to figure out what position would be enough for victory if Hamilton dropped out in the closing stages.
“How am I looking for that position I need in case Lewis drops out?” he asked a race engineer.
“It’s not good at the moment,” came the reply. Jerome Pugmire, Abu Dhabi, AP