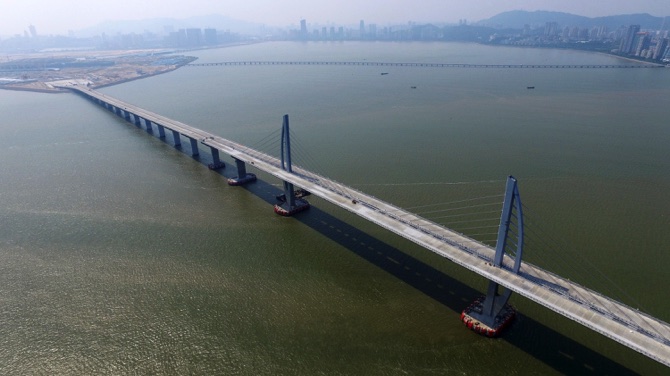 In a Hong Kong Legislative Council transport panel special on Monday, it was revealed that a total of 210 samples could have been falsified, where 203 locations have been confirmed.

Among the 159 critical locations, 114 are above water and land, as cited in a report issued by The Standard. These included 10 on buildings, 29 in tunnels, 28 on the bridge and 47 on other structures. The other 45 are on piles that are underwater or on land.

The neighboring region’s Independent Commission Against Corruption (ICAC) has arrested the 21 employees of the contractor – which monitors the bridge project – last month.

Hong Kong’s Secretary for Transport and Housing, Anthony Cheung Bing-leung, admitted that he knew nothing of the scandal until May 19 when the ICAC arrested the employees. The employees were accused of faking concrete test results for the bridge project by altering time stamps and switching samples in order to meet compressive strength standards.

The secretary defended the Highways Department, arguing that the bureau is only a victim of the fake reports scandal.

The secretary also admitted that he was the last to know about the falsified documents that may compromise the bridge’s structural safety.

According to media reports both the Civil Engineering and Development Department, which outsourced the lab service, and the Highways Department failed to inform Cheung about the irregularities they discovered in July last year.

Meanwhile, Cheung said that the government would conduct core tests of some  structures of the bridge, and that the Highways Department have already hired an adviser firm.

“But it is too early to decide whether core tests will be done on all 159 stress-critical locations with falsified reports,” director of Highways Daniel Chung Kum-wah said.

“A core test means to take a concrete cube from the structure, and that’s certain destruction to the structure. At stress-critical locations there are many steel bars, and core tests might hit these bars, causing these bars to be broken,” he continued.

As of June 1, over 170,000 concrete samples of the bridge project have been analyzed by the government, with 210 of these found to be falsified.

The Macau Chief Executive, Chui Sai On, said last week that citizens should rest assured about the construction quality of the Macau section of the bridge.