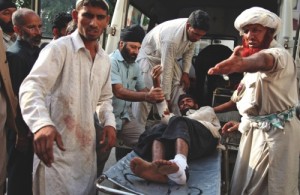 An injured Indian man is brought on a stretcher for treatment at the government medical college hospital following firing by Pakistani troops across the India Pakistan border at Jora farm, Ranbir Singh Pura, in Jammu, India

Troops traded heavy fire between Pakistan and Indian-controlled Kashmir, killing at least four civilians and worsening tensions between the long-time rivals, officials on both sides said yesterday.
The fire exchanges — which Indian officials called the worst violation of a 2003 cease-fire — also wounded 18 civilians on the Indian side and another three on the Pakistani side.
The violence has spread since Sunday night along the 200-kilometer border between Pakistan’s Punjab province and the Indian-controlled portion of Kashmir. That lower-
altitude border, guarded by paramilitary border forces, is lined on both sides by ancient villages and agricultural fields.
Skirmishes also took place farther north, where Pakistan controls a part of Kashmir marked by a U.N.-monitored Line of Control, but no casualties were reported there.
“We have a very serious situation at hand right now,” said Shantmanu, an Indian administrator in the area who uses one name. He said there was panic among people living close to the border.
Tens of thousands have fled homes on both sides. In total, nine civilians on the Pakistani side and seven on the Indian have been killed in the last three nights of fighting, officials said.
“We fail to understand why the Indians are targeting Pakistani civilian populations,” said Maj. Gen. Khan Javed Khan of the Pakistani paramilitary border force. Indian officials have made similar comments, accusing the Pakistanis of focusing on civilian settlements.
Indian authorities moved to government shelters another 5,000 people Tuesday night in the worst-hit Samba sector, said Indian police officer K. Rajendra. Pakistan’s Khan said 12,000 villagers had been evacuated since Monday.
Farmer Gulshan Kumar spent the night huddled with his family in his home in the village of Chilyari, in the Samba sector of Indian-administered Kashmir.
“A shell landed in our neighbor’s home, killing a 70-year-old woman and her 32-year-old daughter-in-law. Her son and a grandson were among the injured,” Kumar told reporters.
In another Indian village called Regal, four tractors pulled carts carrying dozens of people wanting to flee Wednesday morning.
“Yet again we are fleeing our homes, leaving behind everything,” Darshano Devi said.
The U.N. Military Observers Group in India and Pakistan plans to visit the area, the Pakistani military said Tuesday after lodging a protest with the group alleging that Indian troops had fired first.
India has also accused Pakistan of starting this week’s skirmishes, saying it wants to create a distraction to help separatist militants infiltrate into Indian-controlled Kashmir. Pakistan has repeatedly denied this.
“It’s the most serious violation of the 2003 cease-fire,” Rajendra said. That agreement was brokered between India and Pakistan after several years of almost-day border battles. India and Pakistan have fought two wars over Kashmir since they won independence from Britain in 1947.
Still, some Indian officials downplayed the seriousness of the latest flare-up.
“I don’t know whether this can be called a war-like situation. The firing is going on, and we are giving a strong reply,” said D. K. Pathak, the director-general of India’s Border Security Force. Aijaz Hussain and Munir Ahmed, Srinagar, AP