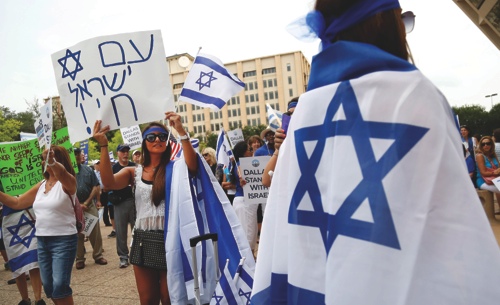 Rebecca Abramov, second from left, holds up a sign in Hebrew during a rally in support of Israel in front of city hall in Dallas, Texas

Prime Minister Benjamin Netanyahu said yesterday that Israel will destroy the Hamas tunnel network in the Gaza Strip “with or without a cease-fire,” as the military called up another 16,000 reservists to pursue its campaign in the densely-populated territory.
Netanyahu’s vow came as international efforts to end the 23-day-old conflict seemed to sputter despite concern over the mounting death toll, with more than 1,300 Palestinians, mostly civilians, and more than 50 Israelis, almost all of them soldiers, killed since July 8.
“We have neutralized dozens of terror tunnels and we are committed to complete this mission, with or without a cease-fire,” Netanyahu said. “Therefore I will not agree to any offer that does not allow the military to complete this important mission for the security of the people of Israel.”
An initial Israeli aerial campaign against Hamas was widened into a ground offensive on July 17. Since then the campaign has concentrated on destraoying more than 30 cross-
border tunnels that militants have constructed to carry out attacks on Israeli territory.
Israel says that most of the 32 tunnels it has uncovered have now been demolished and that getting rid of the remainder will take no more than a few days.
The new reserve call-up follows another day of heavy fighting, in which tank shells struck a U.N. school where Palestinians were sheltering and an airstrike tore through a crowded Gaza shopping area. At least 116 Palestinians and three Israeli soldiers were killed Wednesday. AP