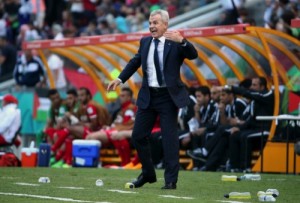 Japan coach Javier Aguirre was fired yesterday over concerns that allegations of his involvement in match-fixing will interfere with qualifying for the 2018 World Cup. Aguirre agreed it was unavoidable, Japan Football Association president Kuniya Daini said at a news conference Former Mexico coach Aguirre became embroiled in a massive match-fixing probe launched by Spain’s state prosecutor in the Spanish league. Aguirre denies any wrongdoing.
“What we had to consider the most was the impact on the Japanese team,” Daini said. “With a criminal complaint accepted, he would have to respond to an investigation, he would be possibly indicted, and then may have to go to court.”
Daini supported Aguirre after Japan was eliminated in the quarterfinals of the Asian Cup, saying he was pleased with the team’s progress. But the prospect of legal problems made the JFA reconsider. “We needed to avoid any risk of this affecting (the team) in the Asian preliminary (World Cup qualifiers),” Daini said. “So we have reached a decision to cancel our contract with coach Aguirre.”
Mexican-born Aguirre was hired in August to replace Alberto Zaccheroni of Italy.
The JFA said it will move quickly to find a replacement, hopefully before the team plays several matches in late March. AP