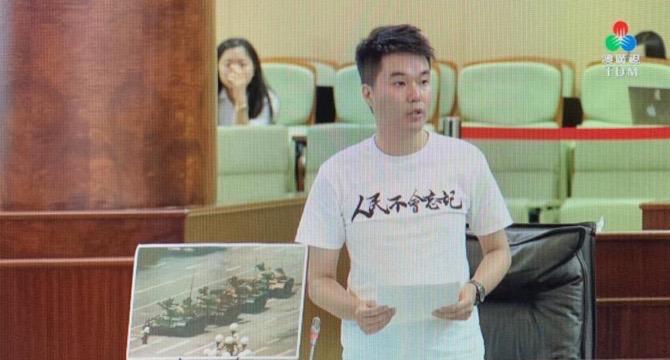 This still taken from video shows Sulu Sou at the AL wearing a t-shirt with Chinese characters that read: “People will not forget.”

Ng expressed his grief by presenting a speech before the AL agenda started.

“Historical truth does not care about government officials’ evaluations. But in order to let the people know about the history to lead the country along the right path of democracy, I hope that the June Fourth Movement can be rehabilitated as soon as possible, and justice is [served] for the people who perished,” Ng’s speech started.

Ng called for the rehabilitation of the June Fourth Movement, having made proposals to China for fair and independent investigations, compensation for late victims’ family members and accountability for the people responsible.

“Saying that the June Fourth [Movement] should not be rehabilitated because it is already history is obviously naïve,” said Au. “In 2014, Xi Jinping said that forgetting history means betrayal, and means denying [criminal] accountability, and means repeating the crime. People should never forget the severe crime committed by the invaders. It [the words] is applicable to tyranny. The difference is that invaders consist of people from other countries killing people from our country, whereas tyranny consists of rulers killing their own people. Both kinds of crime are unforgivable.”

“We keep asking every Japanese president to apologize for their invasion of China and for the Nanjing Massacre. The Beijing authority has never apologized to people who were killed during the June Fourth Movement, to their relatives, and to all compatriots of the Chinese community. Why is that?” Au questioned.

“In fact, even the Chinese Communist Party does not think that this issue is over, because for the last 30 years, during every month of May and June, the CCP authority creates white terror. Tiananmen mothers were taken, imprisoned and then disappeared, while other people were kept under close watch. […] It can be seen that guilty people have done things they are afraid of other people mentioning. It is actually more difficult for them to forget June Fourth than ordinary people,” said Ng.

“June Fourth was indeed a crime of the former government. However, each CCP government in the past 30 years has continued the crime and dirty deals. This is the CCP’s joint career,” said Ng.

“Therefore, every June Fourth warns us that we must defend our existing rights and freedom, because they are like the air: they can’t be touched or smelled, but once they are lost we suffocate and die. Do not forget June Fourth, fight until the end,” said Sou.

Sou was present at the AL with a picture of the June Fourth incident. He wore a t-shirt with Chinese characters that read: “People will not forget.”

Moreover, Sou also criticized Ho Iat Seng, chairman of the AL, for rejecting a motion by Sou, Ng, and Au for a debate on June Fourth. Sou urged Ho to stop using his political power to prevent lawmakers from having a voice.