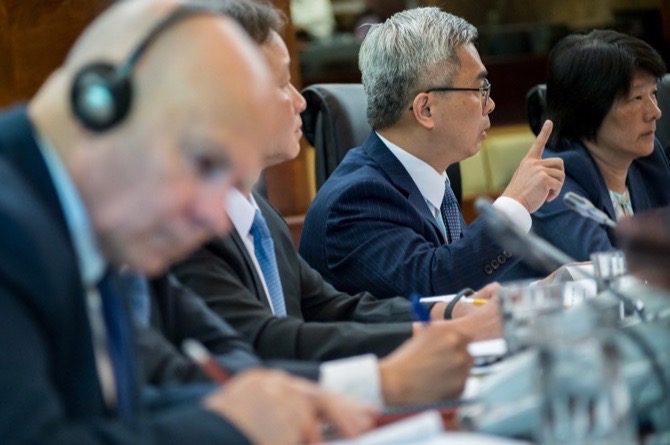 The Civil Protection Law was approved in general terms during yesterday’s Legislative Assembly (AL) plenary session, amid some lawmakers’ worries against the advent of a new crime of “false social alarm.” Responding to enquiries during the session, Secretary for Security Wong Sio Chak refuted the suggestion that Macau was not democratic, calling the notion an “unfair accusation.”

Under the Civil Protection Law, those who spread false rumors during “crisis periods,” such as catastrophes, accidents, disease outbreaks or terrorist attacks, might be sentenced to between six months and three years of imprisonment. It is among the most controversial aspects to a law that has been long-criticized in Macau by various elements in society.

“The public is afraid that, during a civil protection operation, the government might intentionally restrict freedom of speech,” said lawmaker Ng Kuok Cheong.

Lawmaker Pereira Coutinho criticized article 25 of the bill, which is related to the definition of false alarm. Lawmakers Au Kam San and Sulu Sou also criticized this article, which specifically uses such terms as “for other purposes” and “without evidence.”

“If you [the government] do a good job in releasing information, the society will not need to spread information. But the government is not doing well, therefore it [the government] can only approach the bottom line by using criminal accusations in order to inhibit these people who spread false information,” said Pereira Coutinho.  “Article 25 contains big problems.”

Following these lawmakers, Sulu Sou accused the government of taking an inappropriate step by establishing the crime of false alarm.

Regarding the phrase “for other purposes,” Sou asked the security authority, “I don’t understand how these words could be used in a law bill. Is the mainland using them?”

“Who will set up the grounds for the definition of a rumor? If it is the government, then there will be big problems,” he added.

In addition to article 25, the bill also proposes that the government authority has the authorization to call off an ongoing event when a civil protection operation is initiated.

“Will the Civil Protection Law [supersede] the Basic Law to suspend a legal demonstration?” Sou questioned.

Before Secretary for Security Wong Sio Chak responded to the lawmakers, others, including Mak Soi Kun and Ip Sio Kai, addressed, to some degree, the aforementioned lawmakers’ doubts aimed at the Secretary, having mentioned that the article, overall, has legal grounds and that it will only be applicable when an issue occurs during a civil protection crisis.

In particular, Pang Chuan strongly endorsed the establishment of the article.

In response to the lawmakers, Wong Sio Chak noted that 13 articles (the bill has 29 articles in total) are regulations on the government, while two are related to the public.

“It is not just to the public, it is also applicable to civil servants,” said Wong. “Regarding the part related to media, if a media [outlet], including [public broadcaster] TDM, is a member of the civil protection structure, then it needs to obey the law and fulfill its service for civil protection. Regarding other media, the government will encourage them to release the correct information.”

“Regarding article 25, in France, Korea, Switzerland and mainland China, there are punishments of imprisonment for spreading rumors. The most superior status of a society occurs when such laws are not needed. It is possible, in the future, but I don’t know when, although I look forward to it,” said Wong.

The Secretary claimed that all articles have legal grounds in light of the city’s criminal law.

“[Rumor has it that] the People’s Liberation Army is robbing and killing people. What is that? How is this possible?” asked Wong. “These [words] are all badly intentioned to harm the reputation of the Liberation Army. How can this be considered freedom of speech?”

In addition to his response to lawmakers, Wong said he considered himself and the security authority were “brave to dare” to raise the article within the Civil Protection Law.

Following Wong’s answers, Pereira Coutinho noted that in the developed countries mentioned by Wong, there are other laws to protect people because those are democratic countries.

“You say that Switzerland is a democratic country. Are we a democratic society? [You cannot] say that Macau is not democratic when the law has loopholes. This is an unfair accusation against Macau’s democracy and rule of law. I absolutely disagree with your statement,” said Wong.