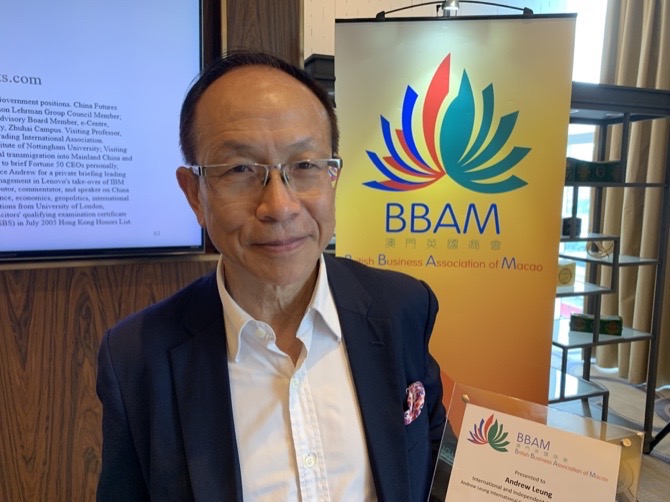 Macau and Hong Kong could retain their ‘second system’ status going into the second half of the 21st century, according to an international and independent China strategist.

Andrew Leung, a former high- ranking government official turned independent strategist, said that allowing Hong Kong and Macau to keep their high degree of autonomy past arrangements due to expire in 2047 and 2049 respectively, could serve Beijing as it seeks to reroute global trade flows under a plan known as the Belt and Road Initiative.

“Hong Kong and Macau have roles to play in the Belt and Road Initiative, the flagship strategy for China to connect to [the rest of] the world,” Leung told the Times on the sidelines of an event organized by the British Business Association of Macao.

“Hong Kong is useful. In constitution it is part of China, but in terms of practice, it is under a different system,” said Leung, who has been practicing as an independent strategist since his retirement from government in 2005. “It’s a very sophisticated financial market with lots of connections to the outside world, and offers the potential for disputes to be arbitrated in its courts. China can make use of Hong Kong’s separate law, its common law, its high degree of judicial independence – which China could never allow to occur [on the mainland].”

Macau might play a similar role in connecting the Portuguese-speaking world to the under-construction trade routes of the Belt and Road Initiative, he added.

A constitutional principle formulated by Deng Xiaoping in the early 1980s, ‘one country, two systems’ refers to the high degree of autonomy that permits Hong Kong and Macau to have their own systems of government, legal framework, and economic, trade and financial affairs. Deng had hoped that the ‘second system’ would persuade the island of Taiwan to rejoin the mainland by peaceful means.

Instead, the island finds itself caught in the crossfire between two economic superpowers warring over trade, tariffs and global influence.

The rise of China has long alarmed many in the West, who fear the realization of a ‘Thucydides Trap’ scenario between the incumbent great power and a challenger looking to displace it. The trap is the tendency for the encounter to lead to military conflict.

Should tensions between the two escalate, the U.S. might find Taiwan very useful. Leung described the American view of the island as “an unsinkable aircraft carrier.”

“The United States recognizes the ‘One China’ principle, but then it also wants to nurture a degree of separation between China and Taiwan,” said the strategist. “It is a balancing act: on the one hand recognizing the principle, and on the other trying to increase diplomatic exchanges with Taiwan […] as if it were a country in all but name.”