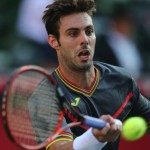 Marcel Granollers of Spain rallied from a set down to beat second-seeded David Ferrer 4-6, 6-4, 6-4 and advance to the second round of the Japan Open.
Granollers converted four of nine break points at Ariake Coliseum and will next face Steve Johnson of the United States. Johnson lost only seven of his first service points and hit 12 aces to beat Japanese qualifier Hiroki Moriya 7-6 (4), 6-2.
The early loss could dent Ferrer’s hopes of qualifying for the ATP finals in London in November. The top eight players qualify and Ferrer is currently ranked seventh.
“I lost my focus in the second set,” said Ferrer, who recently split with coach Jose Francisco Altur. “I have not been playing well recently and have got on a bad run of results.”
Also, seventh-seeded Kevin Anderson of South Africa defeated Dominic Thiem of Austria 7-6 (5), 6-4, and Gilles Muller of Luxembourg beat Federico Delbonis of Argentina 6-3, 6-4.