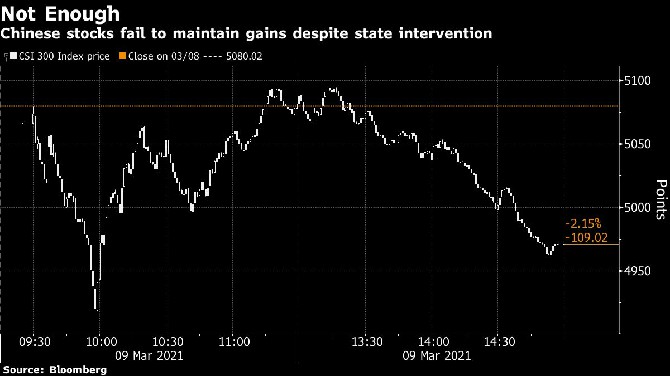 A world-beating rally in Chinese stocks has turned into the biggest rout globally, shocking investors with the severity of its reversal and evading state efforts to slow the pace of losses.
In just 14 trading days, the nation’s benchmark CSI 300 Index has plummeted 14% from a 13-year high. That compares with a 3.3% drop by the MSCI All-Country World Index. The plunge has wiped out more than $1 trillion of value and hammered the holdings of retail investors who piled in at the peak, betting that the new lunar year of the Ox, or bull, would be auspicious. State intervention yesterday briefly arrested the tumble, before losses resumed.
The question on traders’ minds now is how far the slump will go, given the CSI 300 is only a couple of bad days away from entering its first bear market in two years, and whether authorities will do more to calm sentiment. The hand of the state has become less obvious since 2018, when the government reportedly liquidated a handful of mutual funds it had formed three years earlier to purchase stocks during a crash.
But the government has long acted to ensure China’s financial markets are stable, especially around key events. The ongoing National People’s Congress, a closely watched political pageant used to unveil major policy priorities, is one such occasion. To see such turmoil in markets while the NPC is in session is highly unusual. The last time the CSI 300 lost more than 1% during the annual event was in 2014, and the current pace of losses would be the biggest since 2008.
State-backed funds, known as China’s “national team,” stepped in yesterday in order to ensure stability during the NPC, according to people familiar with the matter. A Hong Kong-based trader, who declined to be identified discussing client business, said entities linked to mainland funds were actively buying shares through stock links with Hong Kong yesterday morning.
The efforts were initially successful: the CSI 300 erased a 3.2% drop to gain 0.3% in just over an hour in morning trade. Yet the gauge renewed its decline in the afternoon to close down 2.2% at its lowest level since December, a move that stood out against an upbeat day in global shares. The yuan swung between gains and losses amid the ructions in the stock market before rising 0.2% against the greenback as of 6 p.m. There was no significant impact on China’s local credit market, traders said.
To be sure, authorities had in some ways encouraged the recent correction. Officials repeatedly warned of asset bubbles and said that curbing risks in the financial system was this year’s key policy goal.
Their comments came as signs of speculative activity increased: Liquor maker Kweichow Moutai Co., for instance, had surged 30% in just over a month to be worth more than $500 billion, making it one of the world’s most valuable stocks. Richard Frost, MDT/Bloomberg