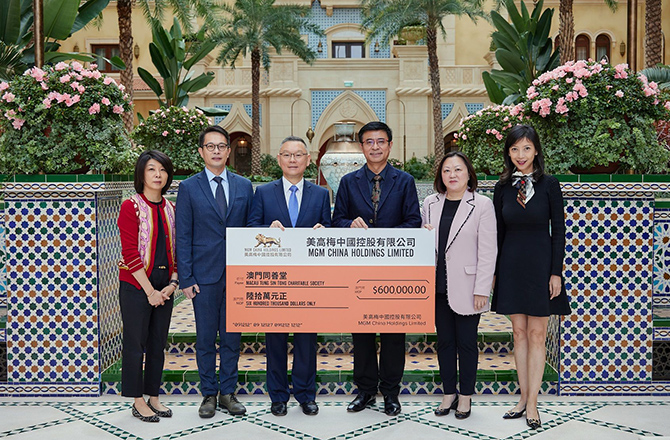 To date, MGM has donated an accumulated total of MOP6 million for 13 consecutive years to the society in contribution towards its provision of local social welfare services at large.

On behalf of the company, Hubert Wang, President & Chief Operating Officer; Wendy Yu, Executive Vice President of Human Resources; and Irene Wong, Vice President of Public and Community Relations of MGM, presented the donation to the Tung Sin Tong delegation at The Mansion of MGM COTAI, including José Chui, President of Board of Directors; Alberto Lei and, Deborah Vong, Directors. Both parties concluded the cheque presentation with a sharing session, where they “exchanged their ideas on local charity development, as well as the support to the local community after the pandemic.”

On top of taking part in the society’s annual fundraising campaign, MGM also provides support to their other charity works. Earlier this year when the pandemic situation was severe, MGM donated temperature guns, hand sanitizers and other anti-epidemic supplies to the society. The donation aimed to strengthen the anti-epidemic measures for their daycare centers, primary and secondary schools as well as elderly activity centers before they could resume services.