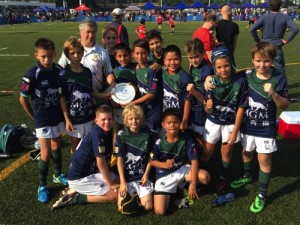 Last weekend the Macau Bats became the first overseas team to win a Hong Kong mini rugby tournament. The team won the Under 12’s ‘Plate’ event at the ‘Flying Kukris Festival’ at Kings Park, Kowloon.
The ‘Bats’ won 3 out of their 4 matches without conceding a single point. Taipa resident Edward Roe used his speed and agility to run in six tries, retaining his title as the team’s top scorer.
“This was a fantastic performance, and a wonderful experience for the boys, coaches and parents. The U12’s victory was even more remarkable as the team competed with only 1 reserve player. To win three matches 5-0, 4-0 and 4-0 is a great achievement,” the team’s coach Paul Baker commented.
Macau junior rugby president Simon Carrington added: “We were blown away by how well the team played today. It’s great for the boys, it’s great for Macau, and it’s great for the sponsors. We must step up our game again if we are to compete at this new higher level. Regardless, this is an incredible achievement for a club as small as ours.”
According to a press release issued by the Macau Bats, next month will provide another “historic moment,” as the U12 team returns to play in Hong Kong’s first division. This division contains the top teams from Hong Kong’s four biggest and oldest rugby clubs. To date, no Macau rugby team has ever played top level rugby in Hong Kong.
The Macau Bats Rugby Club meets at the Taipa Stadium at 10am on Saturdays.