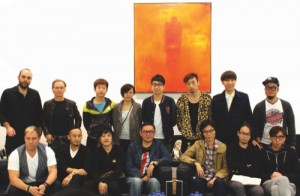 As usual, many local bands will take part in the 10th edition of HUSH!!

Local and overseas bands are going to hit the stage and intend to deliver their audience a memorable live band show at the 10th edition of HUSH!!, the local outdoor rock festival, that will take place on November 22 from 1:30 p.m. at the Macau Cultural Centre’s Art Plaza.
Organized by the Macau Cultural Centre, the event is mainly for showcasing local bands and providing them with a platform to present their work. The show had a humble beginning, with only a turnout of 2,000 people in the first few years. However, with growing popularity and an increasingly diversified audience, attendance reached almost 8,000 last year.
During a meet-the-press session this week, several local bands that will take part in this year’s festival shared their feelings and opinions about the event.
Among the nine local bands is L.A.V.Y., whose bassist Angelo said that it would be great if the show could be more than a single-day event. “I think [making it a multiple-day event] could provide different types of bands with the opportunity to perform. At the moment you only have a limited performing time and limited number of bands in one day, but if there is more time, the number of participants could increase,” he said.
Another live band is Why Oceans, who has experience performing overseas. Its members think that HUSH!! faces more restrictions compared to similar events in nearby regions. “There are many restrictions on HUSH!! because it takes place in the city. The noise issue alone has led to the event, which could be held for multiple days, being grouped into one day,” the band’s guitarist Tommy Chu said.
He also recommended that the organizer include more elements so that people would have more reasons to stay there longer. “[Instead of letting the audience] stand in front of the stage for several hours… with nowhere else to go, maybe there could be some booths they could visit that are related to the arts and creations in Macau, which would allow other local artists to join as well,” he said.
While most of the bands are mainly performing in Chinese, the recently founded Joao Gomes e Banda is going to bring a fusion of traditional Portuguese music and rock to the audience. The group’s lead vocalist and guitarist, João Gomes, said that it is the music itself instead of the language that matters. He said that while playing last year in China, his band was greatly accepted by the audience despite the fact that they probably did not understand the lyrics. “As long as they accept the music, we will be fine,” he said.
Apart from the local bands, there will also be groups from Hong Kong, Beijing, Bangkok, Okinawa and Taipei joining the event, which has free admission. More information can be found on the Cultural Centre website.