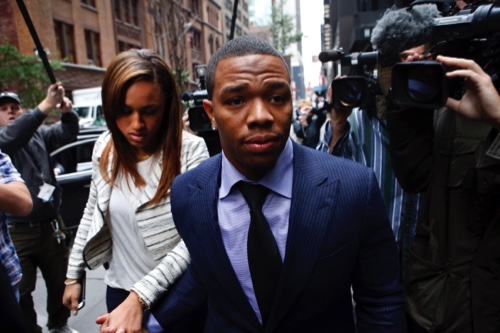 In this Nov. 5, 2014, file photo, Ray Rice arrives with his wife Janay Palmer for an appeal hearing in New York, regarding his then-indefinite suspension from the NFL

The NFL’s troubles with domestic violence were selected the sports story of the year last week in an annual vote conducted by The Associated Press.
Ninety-four ballots were submitted from U.S. editors and news directors. Voters were asked to rank the top 10 sports stories of the year, with the first-place story receiving 10 points, the second-place story nine points and so on.
NFL domestic violence received 659 points and 29 first-place votes.
The No. 2 sports story, Clippers owner Donald Sterling forced out by the NBA after his racist statements, had 518 points.
Here are 2014’s top 10 stories:

1. NFL Domestic Violence: Baltimore Ravens star running back Ray Rice knocked his now-wife unconscious in an Atlantic City casino elevator Feb. 15, but it wasn’t until July 24 that domestic violence cases spiraled into a crisis roiling the NFL. Commissioner Roger Goodell suspended Rice for just two games, which drew widespread derision. More than a month passed before Goodell admitted he “didn’t get it right” and announced harsher sanctions for future domestic violence offenses.
But the NFL’s problems were only beginning. On Sept. 8, TMZ Sports released video from inside the elevator that showed Rice punching his then-fiancee; the Ravens responded by releasing him and Goodell suspended him indefinitely. And on Sept. 12, one of the league’s biggest stars, Minnesota Vikings running back Adrian Peterson, was indicted on felony child abuse charges for using a wooden switch to discipline his 4-year-old son. The Vikings initially planned to play him just over a week later, reversing course only after the ensuing uproar.
The year ends with Rice reinstated by an arbitrator but without a team and Peterson suspended and suing the NFL. Chastened by those and other cases, the league is pushing a new personal conduct policy, but the players’ union is balking at Goodell’s role in the disciplinary process.

2. Clippers’ Sterling Banned: Donald Sterling had withstood accusations of racism throughout his more than three decades as owner of the Los Angeles Clippers. But when audio surfaced April 25 of Sterling spewing racist remarks, he was banned for life by new NBA Commissioner Adam Silver just four days later and forced to sell the team.

3. Lebron Goes Home: This time, LeBron James decided to return home. Four years after spurning Cleveland to sign with the Miami Heat, the Northeast Ohio native and four-time NBA MVP announced July 11 that he was rejoining the Cavaliers to try to end the city’s half-century title drought.

4. Firsts For Gay Athletes: Jason Collins became the first openly gay man to play in the big four North American pro sports leagues when he made his debut with the Brooklyn Nets on Feb. 23. The veteran center had come out 10 months earlier, a trailblazing moment that helped inspire other athletes and sports officials to follow his lead in 2014. That included Missouri All-American Michael Sam, who went on to be drafted into the NFL, though he has yet to play in a game.

5. Giants Win World Series: Madison Bumgarner pitched seven dominant innings to win Game 1 of the World Series. Then the San Francisco ace topped himself with a shutout in Game 5. He outdid himself yet again with five scoreless innings of relief in Game 7 to clinch the Giants’ third championship in five years.

6. College Football Playoff Pays Off: Ohio State lost to Virginia Tech on Sept. 6. Oregon was upset by Arizona on Oct. 2, and Alabama fell to Ole Miss two days later. The rest of those teams’ regular-season games still mattered because of the new College Football Playoff, which made more and more matchups meaningful deep into the fall.

7. Tony Stewart: One of NASCAR’s biggest stars, Tony Stewart, was taking part in a small sprint car race in upstate New York on Aug. 9 when he struck and killed 20-year-old driver Kevin Ward Jr. A grand jury decided not to bring criminal charges against Stewart, who skipped three NASCAR races as he grieved.

8. World Cup: Brazil’s World Cup was a big celebration until those German goals started piling up. The expected massive protests didn’t materialize, and the construction delays caused few headaches. The major disappointment came on the field when the hosts, without injured star Neymar, were thrashed 7-1 in the semifinals by eventual champion Germany.

9. Seahawks Win Super Bowl: Richard Sherman’s Seattle defense was way too much for Peyton Manning’s Denver offense. The Seahawks flustered and flattened the Broncos with a 43-8 victory in the Super Bowl, when the weather cooperated outdoors in New Jersey.

10. Sochi Olympics: The Sochi Olympics opened amid fears of terrorist attacks and denunciations of Russia’s so-called “gay propaganda” law. The games went on peacefully, with the hosts winning 33 medals — though not in hockey. But by the closing ceremony, darkness lurked nearby in the world in violence in Ukraine. Rachel Cohen, New York , AP