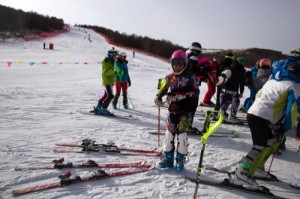 Beijing is ramping up its bid for the 2022 Winter Olympics by holding a series of international athletic competitions and promotional events.
Games organizers said yesterday the upcoming season-opening Freestyle Skiing World Cup in Beijing’s Bird’s Nest stadium will be the first of six international competitions in the capital city and Shanghai. Skating events make up most of the remainder.
Another six activities are being held to stir interest in the games bid among the public, including a mass participation event on world skiing day in January.
After several other potential bidders dropped out, Beijing is now considered the front runner to win the games in a two-city race with Almaty, Kazakhstan.
Public participation in skiing, ice hockey and other winter sports is growing fast with rising incomes. AP