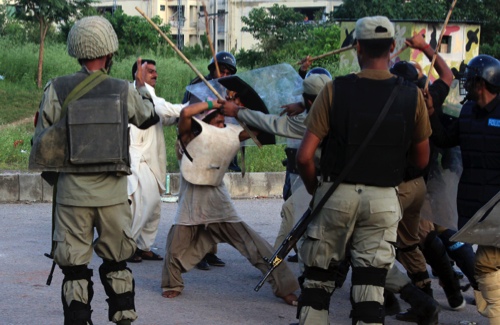 Police beat a protester during clashes in Islamabad, Pakistan

Pakistan’s lawmakers held an emergency session yesterday over the political crisis roiling the country as thousands of anti-government protesters remained camped out in front of the parliament building, demanding Prime Minister Nawaz Sharif resign
The session of both houses — the National Assembly and the Senate — is an attempt to rally support behind the prime minister, who is facing the biggest threat to his tenure since he took office a little more than a year ago.
Anti-government demonstrators led by cricket star-turned-
politician Imran Khan and fiery cleric Tahir-ul-Qadri converged on the capital in mid-
August. The protests turned violent this weekend, when clashes between the demonstrators and police left three people dead and hundreds injured.
Now, thousands of protesters, who broke through a fence surrounding the parliament, are camped out on the lawn in front of the building and have essentially taken over Constitution Avenue which runs past the country’s main institutions of power, including the Supreme Court and the prime minister’s office.
Interior Minister Chaudhry Nisar Ali Khan criticized the demonstrators during the opening speech of the session, as the prime minister sat quietly by his side.
“This is a revolt against Pakistan,” the interior minister said. “They are fake revolutionaries, and they are terrorists.”
It was not immediately clear if Sharif, who has repeatedly vowed not to resign, would address the session later. The session is expected to last a week.
One by once, all the speakers threw their support behind Sharif, including the leader of the main opposition party. Aitzaz Ahsan from the Pakistan People’s Party criticized Sharif at times, saying that he should have shown better judgment in dealing with the protesters’ concerns earlier and saying that vote-rigging had taken place during the May 2013 election.
He also joked about how the political crisis would make Sharif appear in parliament more often, a dig at what many view as the prime minister’s arrogance and failure to engage with anything more than a small circle of close advisers.
However, most importantly, Ahsan gave Sharif his whole-hearted assurances that his party backed the government.
“No one can force you to resign as all of us are fully backing you,” he assured Sharif. “It is illegal and unconstitutional to demand the prime minister’s resignation like this.”
Khan and Qadri allege widespread fraud in the May 2013 election that brought Sharif to power in a landslide victory. International observers did not find any indication to back up their claims of vote-rigging.
The two have been addressing their followers frequently, urging them to come to the streets to push out Sharif from power. They both claimed they would lead a million-person march on to the capital, but the largest crowds have only seen tens of thousands of people.
Most of Khan’s supporters have already resigned from parliament but one of his former top allies, Javed Hashmi, appeared in parliament yesterday, entering to a standing ovation. Hashmi broke with Khan over a decision by the party to march on the prime minister’s house, a move that sparked violence Saturday evening.
Hashmi on Monday raised the specter of military involvement in the protests, alleging that Imran’s demonstration was scripted ahead of time and that Imran believed he had the support of the military. The military denied it is backing the protesters.
But in a country where the army has taken control in three coups, the protests have sparked concerns the military is trying to weaken Sharif. AP