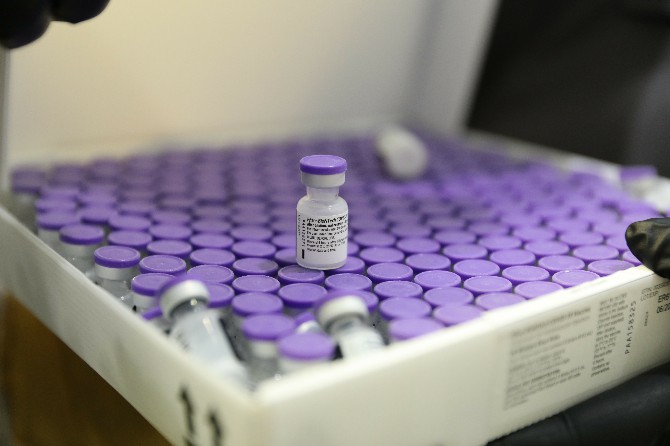 The Chinese company with the deal to distribute BioNTech SE and Pfizer Inc.’s Covid-19 vaccine in “Greater China” says it’s willing to supply Taiwan, after the contested island suggested Beijing blocked it from securing the shot.
Speaking in an interview from Shanghai, Guo Guangchang, the chairman of Fosun International Ltd. – whose medical arm has the deal with Germany’s BioNTech – said the company “has the responsibility, duty and willingness to offer the best vaccine to the Greater China region, including Taiwan.” Guo said he hopes this “desire can soon be realized,” without elaborating further.
The blockbuster shot is the latest source of tension between China and Taiwan, which Beijing claims is part of its territory but which has its own government and sometimes forges its own deals with foreign pharmaceutical developers.
The agreement between BioNTech and Guo’s Shanghai Fosun Pharmaceutical Group Co. gives it the right to distribute the vaccine in mainland China, Hong Kong, Macau and Taiwan, Fosun says. Taiwan has been pursuing its own supplies directly from BioNTech, but sees a diminishing chance of securing an agreement, the health minister said this week, after claiming in February “political pressure” scuppered a deal for 5 million doses from the German developer. While hugely successful at containing Covid, Taiwan has struggled to procure vaccine supplies and is falling behind on inoculation.

Taiwan responds
In response to Guo’s comments, Chuang Jen-hsiang, a spokesman for Taiwan’s Central Epidemic Command Center, said that the government had spoken directly to all vaccine providers including BioNTech. “There is no message from BioNTech to us saying that we should talk to Fosun instead,” he said.
Taiwan has already signed off on a supply deal with BioNTech, it’s just waiting for the company to respond, Chuang said.
A representative for BioNTech declined to comment.
It appears the German company has been caught up in the two sides’ increasingly fraught relations.
Taiwan’s government was making final preparations for the 5 billion-dose deal with BioNTech in January, but then “things changed,” Health Minister Chen Shih-chung said in an interview Feb. 17. “We believe there was political pressure,” said Chen, who didn’t explicitly name China, but “external forces.”
Beijing later pushed back at the suggestion it had blocked vaccine purchases, saying Taiwan’s government “should stop hyping up political issues under the pretext of vaccine issues.”

Rocky rollout
Deals covering Greater China are not uncommon in the pharmaceutical space, especially if a Chinese company has a sales presence on the ground in Taiwan.
Shanghai-based Zai Lab Ltd. has licensed drugs for cancer and autoimmune diseases from U.S. companies Cullinan Oncology and Argenx for the Greater China region, including Taiwan. Chinese company CStone Pharmaceuticals has also licensed cancer drugs from Blueprint Medicines Corp and Agios Pharmaceuticals for places that include Taiwan.
The confusion over Taiwan comes as Fosun’s rollout of BioNTech shots elsewhere in the region also faces uncertainty. Hong Kong has temporarily suspended the vaccine after packaging defects were found in some batches, while mainland China – which is aggressively rolling out its own, homegrown vaccines – is still yet to approve of the shot for use.
Guo said he expects Beijing to approve the BioNTech vaccine “before long,” but declined to give a timetable. Hong Kong’s government said it hopes to resume the BioNTech vaccinations this week after a probe found no safety issues.

More R&D
Fosun considers its deal with BioNTech to be valuable and is seeking wider collaboration with the German company beyond the Covid deal, Guo said, adding that the vaccines business is “a very important strategy for us going forward.”
“Our scientists are also looking for more, better partners around the world,” he said.
Fosun Pharma spent more than 4 billion yuan ($609 million) last year on R&D, according to its financial statement. That investment will go up this year, Guo said. The company’s Indian unit Gland Pharma Ltd. signed a deal earlier this month to supply Russia with 252 million shots of the Sputnik V vaccine and is exploring more manufacturing partnerships. MDT/Bloomberg