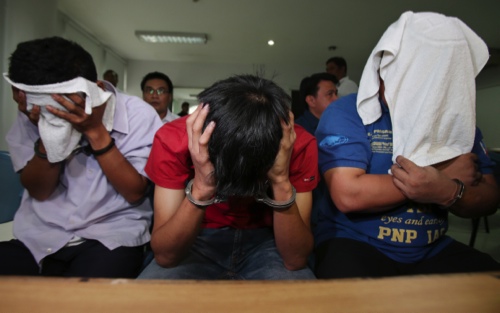 Filipino suspects, from left, Sonny Yohanon, Emmanuel San Pedro and Grandeur Pepito Guerrero, members of a group who call themselves as USAFE, wait for inquest proceedings at the Department of Justice in Manila

Philippine authorities said yesterday that they arrested three men linked to a group that was planning to set off firebombs at Manila’s international airport and a major mall in the city to protest the government’s alleged “soft” stance in its territorial dispute with China. The military, however, downplayed the planned attacks, saying the men were just seeking attention.
The leader of the group and two other men were arrested Monday with four homemade incendiary devices found inside their car at one of the airport’s parking lots, Justice Secretary Leila de Lima said.
Government agents, who were tipped off by an informant, said the men planned to set off one bomb at a parking lot restroom and the three others inside one of the country’s biggest shopping malls, which has ethnic Chinese owners.
The territorial dispute between the Philippines and China has been simmering for years and Manila has occasionally filed diplomatic protests against alleged Chinese incursions into areas it claims.
The Philippines filed a case last year with the Arbitral Tribunal in The Hague, questioning China’s massive territorial claims over nearly the entire South China Sea, angering Beijing.
De Lima said the “ultra-rightist” but “misguided group” planned also on Monday the “strafing” of the Chinese Embassy in Manila and a building owned by a company operating a power plant that allegedly employed Chinese workers illegally.
“They are not content, they are frustrated over the stance of the government against China, which to them is very soft,” de Lima said. “They want this administration to espouse a tougher stance in its dispute with China.”
She said the men would be charged with possession of explosive materials, a non-bailable offense. The Justice Department also was considering filing conspiracy to commit terrorism charges against the three, she said.
Military Chief of Staff Gen. Gregorio Pio Catapang played down incident and described the arrested men as “pranksters” who wanted to get public attention.
“I don’t think it’s a terror attack because these were just firecrackers,” Catapang told reporters.
De Lima said the group considers China and wealthy ethnic Chinese like the owners of the mall as enemies.
Rommel Vallejo, head of the Anti-Organized Crime Division of the National Bureau of Investigation, said each of the firebombs consisted of a firecracker as big as the palm of hand with an eight-second wick taped to a plastic bottle containing gasoline.
De Lima said the blast from one of the devices could create a huge fireball and send debris flying 5-10 meters away, which could cause fatal injuries.
De Lima said there were other members of the group and investigations were continuing. AP