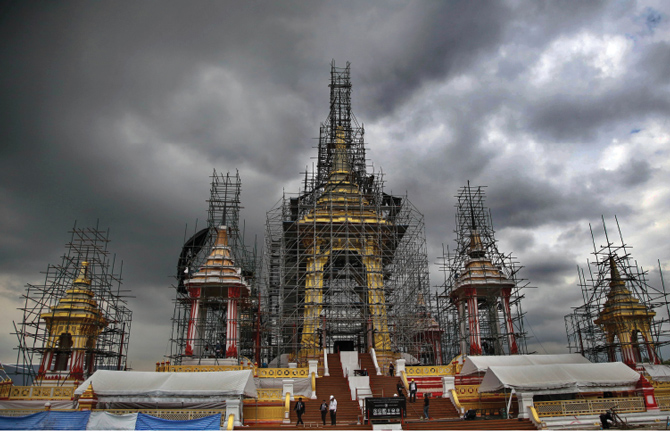 Mythical creatures, angels and gods are coming to life near Thailand’s Grand Palace, thanks to the tireless, devout and often volunteer work of artists and craftsmen. They are building a monument for a single moment: the cremation of a beloved king.

More than 100 sculptures and statues will be placed inside a crematorium complex for King Bhumibol Adulyadej, who reigned for 70 years before his death Oct. 13, 2016. The structure represents Mount Meru, the place where Buddhist and Hindu gods reside.

Bhumibol was revered by many Thais as their father and a demigod. Huge crowds lined the route when a cortege took his body to the Grand Palace the day after his death, and millions have paid their respects at the throne hall where his body rests in a royal urn.

He will be cremated this Oct. 26 in a ceremony that is expected to be beamed around the world and will be one of the most expensive in history with a budget of 1 billion baht (USD30 million). Afterward, the crematorium will be dismantled.

For the millions of Thais who loved the king, what matters is more personal — how they can contribute to his final goodbye.

Amid a clatter of hammers and a deafening whirr of metal grinders, nine elegant, elaborate pavilions have arisen on a field opposite the Grand Palace. The construction is ahead of schedule and the funeral preparations are nearly complete, according to the country’s Fine Arts Department. 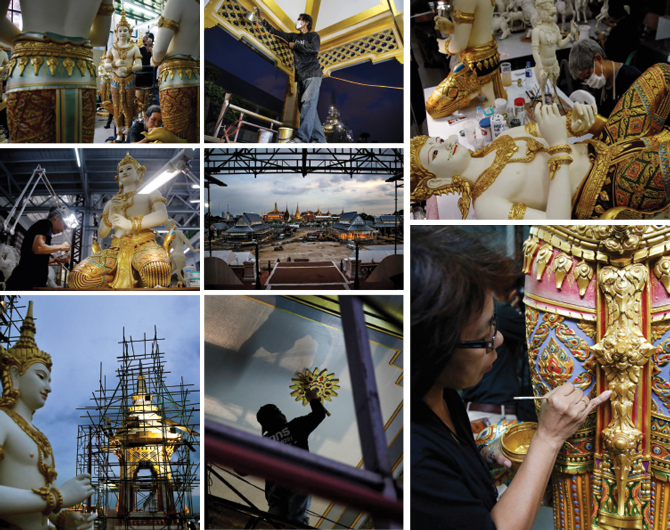 “Many [artists] who are here are loyal and faithful to the late king,” said Surathkij Pheeraphongsil, a director in the department. “Nobody complains about difficulties or about being tired because the late king endured more than us.”

At the Fine Arts Department, close by the cremation site, the artisans, craftsmen and artists painstakingly apply the last layers of paint to an array of deities and creatures from ancient epics. Statues of former kings of Thailand, already completed, stand to one side.

Many of the artists are providing their skills for free.

“This event has brought together talented artists from across the country to create the most amazing art pieces for the late king,” said painter Charoen Marboot. AP