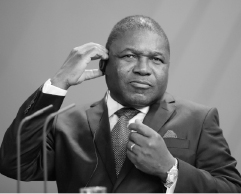 The President of Mozambique Filipe Nyusi is due to make an official visit to the Republic of China next week, with meetings scheduled with his counterpart Xi Jinping and other Chinese officials, Macauhub learned from a diplomatic source in Maputo.
This will be the first official visit by Nyusi to Beijing since he became president of Mozambique, although he met President Xi Jinping in December 2015 in Johannesburg during the Forum for China-Africa Cooperation.
During the visit, the Mozambican delegation will travel to Beijing and the provinces of Shandong and Jiangsu.
The visit of the President of Mozambique will be essentially of economic nature and diplomatic sources contacted in Maputo have noted its importance at a time when China is likely to strengthen the financial support granted to Mozambique following a retraction from other donors and international institutions.
Last year China became Mozambique’s largest bilateral creditor after increasing funding to the African country by 160 percent since 2012, and providing a new loan of USD400 million in mid-2015.
Last week China and Mozambique signed an economic and technical cooperation agreement, under which African country will receive $16 million to fund drilling of 200 boreholes for drinking water, the purchase of 80 buses for public transport, construction of the China-Mozambique Cultural Centre
and other projects of social impact to be agreed between the two governments.
On signing the document, the Chinese ambassador to Mozambique, Sun Jian said that China wants to increase aid to Mozambique as a way to help the country overcome “this bad time” as Mozambique “has been an example and one of the fastest growing economies in the region.” MDT/Macauhub