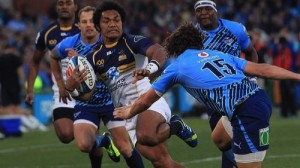 Fiji-born winger Henry Speight was picked by Australia for the Rugby Championship next month even though he’s available for only the last three of their six matches.
Speight won’t be eligible to play for the Wallabies until Sept. 11, the end of his 36-month wait to play test rugby.
The winger made his debut for the ACT Brumbies in 2011, but a short stint playing for Waikato in the New Zealand provincial championship delayed his eligibility for the Wallabies, who aren’t wasting any time to include him.
The first match he’s available for will be against Argentina on Sept. 13 on the Gold Coast.
Luke Burgess was in the 32-man squad named yesterday in place of scrumhalf Will Genia, who may still be recalled in the series if he recovers from an ankle injury.
Genia’s Queensland teammate, flyhalf Quade Cooper, was also omitted as he recuperates from hip and shoulder surgeries, while winger Joe Tomane replaces Nick Cummins, who has left to play in Japan.
The squad, captained by Michael Hooper, includes 25 players who featured in the 3-0 sweep of France last month.
“We’ve come a long way as a group over the past 12 months and the consistency we’re now applying across selections, high-performance behaviors, and our playing style is a positive sign that we are heading in the right direction,” coach Ewen McKenzie said.
“The challenge for us now is to continue this consistency.”
There are 11 players each from New South Wales and ACT, who meet in the Super Rugby semifinals on Saturday in Sydney.
The Rugby Championship, from Aug. 16 to Oct. 4, opens with the Wallabies hosting the All Blacks in Sydney. AP