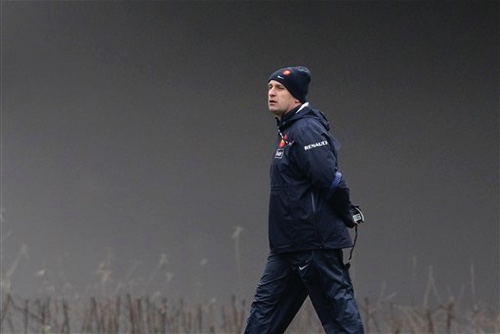 France coach Philippe Saint-Andre has named an unchanged side to face Australia in tomorrow’s test match after last weekend’s 40-15 rout of Fiji.
The 21-year-old Teddy Thomas again starts at left wing after scoring a hat trick of tries on his debut, while South African-born Scott Spedding also wins his second cap at fullback, as does right-
winger Alexandre Dumoulin.
“You don’t change a winning team. I saw some positive signs (against Fiji),” Saint-Andre said Thursday. “We want to carry on with the same 15, who will need to find even greater understanding and teamwork against Australia.”
Thomas made a particularly strong impression, scoring from the opening kickoff with a great catch following flyhalf Camille Lopez’s kick in the first minute.
“He’s fast, he wins his challenges and he scores tries,” Saint-Andre said. “Spedding’s first cap was a quality performance, the same goes for Dumoulin.”
Saint-Andre has named a larger group of 12 reserves, which he will trim down to eight today.
Flanker Yannick Nyanga, center Mathieu Bastareaud and fullback Maxime Medard are among those hopeful of getting a place on the bench for the match at Stade de France.
France has a doubt over lock Yoann Maestri, after he took a knock to the thigh and limped out of Thursday’s training session.
Australia opened its European test campaign with a 33-28 win over Wales at Cardiff.
“They won a lot of turnovers and they have individuals who are capable of winning one-on-ones,” Saint-Andre said. “We still have some work to do. We conceded two tries from defensive mistakes (against Fiji).”
The Wallabies had a 3-0 series win over the French in Australia in June — including a 50-23 defeat that was the fifth highest points tally ever conceded by France.
Saint-Andre is still pained by the lack of fight shown by a dispirited French side in that series.
“We have a triple revenge to take. What struck me most was the third test (a 39-13 defeat) where we collapsed too quickly,” Saint-Andre said. “That’s unacceptable when you represent a country.”
France’s miserable run against Australia in recent years has seen it lose eight of the past 10 meetings, including a crushing 59-16 loss four years ago at Stade de France — the most points France has ever conceded at home. France gained some revenge by easily beating an ill-prepared Wallabies side 33-6 two years ago at the same venue.
Michael Cheika replaced Ewen McKenzie as Wallabies coach immediately before the tour, which closes with tests in Ireland and England.
France caps its three-test series with a home game against Argentina on Nov. 22 AP