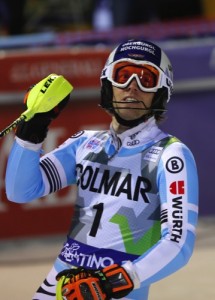 Fritz Dopfer of Germany made his No. 1 start bib count to lead the first run of a World Cup slalom yesterday.
Dopfer used the best conditions to clock 56.21 seconds in steady snow on a rain-softened course, 0.10 ahead of Italy’s Patrick Thaler.
Marcel Hirscher of Austria was third, with 0.75 to make up on Dopfer in the afternoon second run. The top three were among the first four starters.
“It was the key,” said Dopfer, who will be last to race in the afternoon. “I had an advantage for the first run but kind of a disadvantage for the second run because I have a high (start) number.”
Hirscher can take the season-long slalom standings lead from Felix Neureuther of Germany, who started sixth but failed to finish.
After winning the giant slalom Saturday, Hirscher should again extend his overall standings lead. The 25-year-old Austrian has won this race the past three years on his way to taking the overall title.
Olympic champion Mario Matt, who edged his teammate Hirscher for gold in Sochi, also failed to complete his run.
Ted Ligety of the United States was 14th-fastest, 1.98 back, after racing through fog at the top of the course.
“I had a pretty mediocre run,” said Ligety. “Now I’m stuck in my usual slalom second-run purgatory position between 10 and 20.”
Host nation Switzerland had another difficult run after failing to place a GS racer in the top 20 on Saturday.
The only Swiss racer in the top 30 qualifying for a second run was 24th-­placed Luca Aerni, 2.73 behind Dopfer. AP