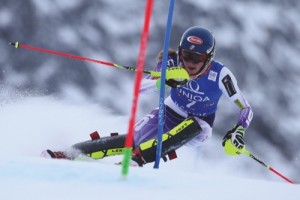 American skier Mikaela Shiffrin continued her recent resurgence by building a commanding lead in the opening run of a World Cup slalom yesterday.
The Olympic champion timed 56.88 seconds on the Crveni Spust course to lead second-place Kathrin Zettel of Austria by 0.80. Sarka Strachova of the Czech Republic was 1.03 behind in third.
“I felt really good, I felt fast,” said Shiffrin, who leaned backward and nearly skied out on the finish steep but quickly recovered. “I watched Zettel go out of the gate as she went just before me. I was watching her, thinking, ‘She’s really fast, I have to go fast, too.’”
Shiffrin won the slalom World Cup the past two seasons but failed to reach a podium in the first three races this season until winning in dominating style in Kuehtai, Austria, last week.
“With every single run that I take I get more confident,” the American said. “My skiing is good right now, it’s kind of back on track and my equipment feels really good.”
The 19-year-old Shiffrin, who won the event two years ago, is aiming for her 11th career slalom victory to match a World Cup record set in 1980 by France’s Perrine Pelen for most slalom wins as a teenager.
Frida Hansdotter of Sweden, who tops the slalom standings, trailed Shiffrin by 2.15 in eighth while overall leader Tina Maze of Slovenia came fifth and had 1.75 to make up in the second run.
Former overall champion Nicole Hosp of Austria, who won in Aspen in November, skied out.
There is one more slalom before next month’s world championships in Vail and Beaver Creek — in Flachau, Austria, on Jan. 13. Eric Willemsen, Zagreb, AP