Somalia | Kerry visits Mogadishu; 1st such trip for a secretary of state 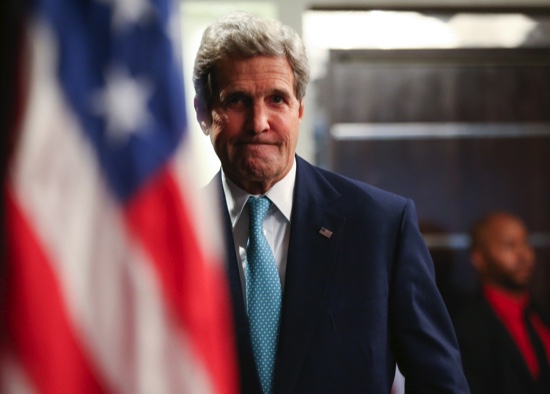 Secretary of State John Kerry made an unannounced trip to Somalia yesterday in a show of solidarity with a government trying to defeat al-Qaida-allied militants and end decades of war in the African country. He is first top U.S. diplomat ever to visit Somalia.
Kerry arrived at Mogadishu’s airport shortly before noon local time, greeted by Somalia’s president and prime minister on the tarmac. He immediately entered a series of planned meetings that include both of them along with regional leaders and civil society groups.
“I’m glad to be here,” Kerry said.
“This is a great moment for us. Thank you for the time to be with us,” President Hassan Sheikh Mohamud said as they sat down together.
The trip was made under tight security conditions. Somalia’s government only found out a day ago that Kerry would join the State Department’s top Africa official, Linda Greenfield-Thomas, on the voyage. And the fact that he was only dipping his toe in Somalia, and not venturing past the airport, highlighted just how dangerous and instable the country remains.
“The next time I come, we have to be able to just walk downtown,” Kerry told Somalia’s president. Mohamud replied, downtown “is very different now.”
Top of the agenda is the fight against al-Shabab. African forces and U.S. drone strikes have crippled the organization’s leadership in recent years and left the extremists without much of the territory they once controlled or the cash flows needed to reverse their losses.
But as al-Shabab has decentralized, the militants in some ways have become even more dangerous, expanding their activities in Kenya and other neighboring countries. Last month’s massacre at Kenya’s Garissa University College killed 148 people, mostly students, and underscored the group’s capacity to carry out relatively unsophisticated but extremely deadly terrorist attacks far from its bases of operations.
Kerry’s trip is designed “to reinforce the United States’ commitment to supporting Somalia’s ongoing transition to a peaceful democracy,” spokeswoman Marie Harf said in a statement. Bradley Klapper and Andrew Harnik, Mogadishu, AP