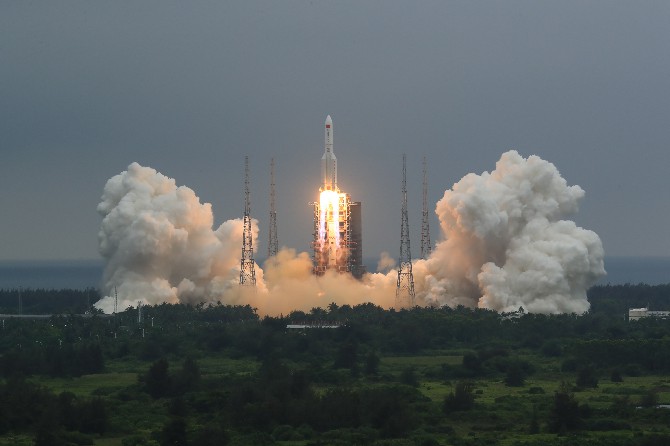 Remains of a huge Chinese rocket have landed in the Indian Ocean amid global concern the country’s space program lost control of a giant chunk of debris.
Pieces of the Long March 5B rocket re-entered the atmosphere at 10:24 a.m. yesterday and plunged into the sea at around 72.47 degrees east longitude and 2.65 degrees north latitude, according to a statement by the China Manned Space Agency posted on its official website.
China launched the rocket in late April to deliver the first part of the country’s space station, but unlike other large launch vehicles that typically fall back to Earth in a pre-planned area, the Long March 5’s core stage went into orbit, too. China’s Foreign Ministry said Friday that the rocket was unlikely to cause any damage because most of it would burn up during re-entry.
“Most components have been burned and destroyed during the re-entry into the atmosphere,” according to the Sunday statement.
Under President Xi Jinping, China is trying to become a space power on par with the U.S. In 2019, the Asian nation became the first country to send a probe to the far side of the moon, and this month a Chinese spacecraft will attempt to land on the surface of Mars.
The Long March 5B debris wasn’t the first scare involving China’s giant rocket, which the country is counting on for its space station as well as deep space exploration.
Last year, part of a Chinese rocket crashed in the West African nation of Cote d’Ivoire after Chinese authorities seemed to have lost control, the U.S. Space Command said at the time. The crash earned China a public rebuke from then-NASA Administrator Jim Bridenstine.

Commonplace
The new incident with the Long March 5B raises the prospect of uncontrolled re-entries becoming commonplace, according to Jonathan McDowell, a scientist at the Harvard-Smithsonian Center for Astrophysics in Cambridge, Massachusetts, because China will be using the rocket for its space station as well as other missions.
“Now we can conclude that this is design feature of the Long March 5B,” he said.
Since the demise of Skylab, the NASA space station that crashed into Western Australia in 1979, most programs have gone to great lengths not to risk putting big stages of rockets into orbit.
“If you design them the dumb way, they end up in orbit,” McDowell said. “For some reason, China when designing the Long March 5B said ‘We don’t really care, we’ll just do it the simple way’.”
That may be because of the unusual design of the Chinese rocket, according to Adam Gilmour, CEO of Gilmour Space Technologies, an Australian company based on the Gold Coast, Queensland, that plans on launching its first rocket next year.
The second stage of the Long March 5B is much larger than that of a comparable rocket from Space Exploration Technologies Corp., or SpaceX, the company backed by billionaire Elon Musk, Gilmour said.
“You shove up into space this massive second stage, and if you can’t control it safely to land, you might damage things,” he said.
The lack of information from China regarding the rocket highlights the need for greater openness from that country about its space projects, said Richard de Grijs, an astrophysics professor at Macquarie University in Sydney and former faculty member at Peking University in Beijing.
“The Chinese space program is run by the Chinese military, so it’s very hush-hush,” he said.
While that military control is unlikely to change, China could still find ways to share more information with outsiders, something that will be increasingly important as it moves forward with projects like the space station.
“Whenever you send up a rocket, it needs to go somewhere,” de Grijs said. “There will be more debris.” Bruce Einhorn, MDT/Bloomberg