Spain takes an economic gamble on an unprecedented wage hike 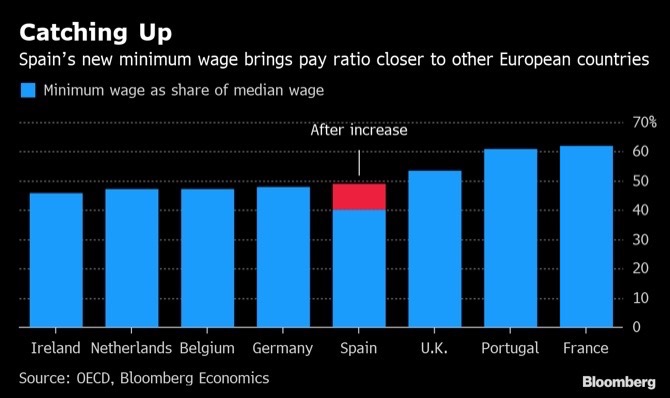 Spain is embarking on a major economic experiment: A 22 percent jump in the minimum wage that’s ignited a high-stakes debate about how it will impact the economy.

The Socialist government says the increase will bolster spending and hiring, giving legs to Spain’s expansion. But opposition lawmakers and wary business executives say any additional pep to the economy won’t be enough to offset the thousands of jobs they expect to be destroyed because companies can’t afford the jump in costs.

The increase to 900 euros (USD1,021) from 736 euros a month came into effect at the start of the year and directly impacts about 8 percent of Spain’s workforce, or 1.2 million employees. Its effects are already rippling through Spain’s economy, forcing companies to respond.

Jorge Montes, who runs a dry cleaners in Madrid, is about to raise his prices for the first time in a decade to cover the 164 euros more per month in salary he’ll pay to one of his two full-time employees.

“I’m going to try to pass that on to the consumer,” Montes said. “I didn’t dare do it before because I didn’t want to lose market share.”

Madrid joins other governments around the world, including France, Greece, a Canadian province and some U.S. states, that have recently lifted minimum-wage rates to jump start broader salary growth, which has remained sluggish despite the economic recovery. For politicians, it’s a way to curry favor with voters and diminish the appeal of anti-establishment parties.

Spain’s central bank estimates the wage jump could destroy around 125,000 jobs this year. But it acknowledges it can’t know for sure given the “uncertainty associated with a national minimum wage increase on an unprecedented scale in Spain.”

Budget watchdog AIReF has a more modest estimate of 40,000 jobs this year, while Spanish bank BBVA says more than 160,000 positions could be lost in the medium-term.

Those forecasts are particularly jarring in Spain, where unemployment is the second-highest in the euro zone. But Raymond Torres, an economist at Funcas think tank in Madrid, says recent evidence shows higher salaries fuel greater spending that sparks more hiring, offsetting most of the job loss.

There’s additional uncertainty given the timing: Spain, along with all of Europe, is moving into a slowdown that could worsen this year.

“We are in uncharted waters, nobody quite knows what the impact will be,” Moody’s analyst Kathrin Muehlbronner said by phone. It “does come at an unfortunate time.”

At the European Central Bank, officials may be watching as they monitor labor-market developments and underlying price pressures across the region. Its efforts to lift inflation have had limited success: Core inflation is 1.1 percent in the euro area, and even lower in Spain.

Assuming that employers pass on most of the increased labor costs to consumers, Spanish inflation could get a boost of as much as 0.4 percentage points during the next year, according to Bloomberg Economics.

Profit margins have been on the rise in recent years, which means some companies will be able to shoulder higher labor costs. Those that don’t may have to cut employees’ hours, slow hiring or lay off workers.

“We can’t have poor workers,” said Hilario Alfaro, the owner of several clothing stores in Madrid. “We support an increase in wages as long as it’s linked to productivity.”

It’s a “necessary measure,” he said. “But they shouldn’t have done it so abruptly and with so little planning.” Jeannette Neumann, Bloomberg