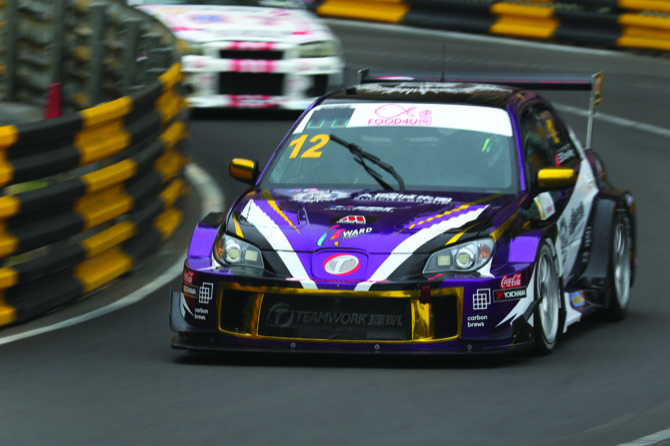 The dramatic race was, in fact, the poorest of all the racing events over the week, mostly due the unsportsmanlike conduct of the drivers – in this case, Macau’s Lei Kit Meng driving a Nissan GTR-34.
Since last year, the race has combined the 1600cc Turbo and the Over 1950cc classes. This year it saw a great start by the two front- row sitters, with Wong and Kinoshita battling their way through the first section of the circuit followed closely behind by Poon.

After only a single lap was completed, the safety car had to be deployed after Lei hit the barrier at Mandarin bend. A few seconds later, Kevin Leong put an end to his race by doing the same at Maternity Bend.
Worst still, Lei, although now driving a very damaged car, did not stop on the first possible opportunity to make it easy for the race to restart. Instead, he drove along the circuit for over one lap until the race direction showed him the black flag to disqualify him and order his immediate return to the pits.

The incident caused over 15 minutes of suspense, since while riding along the track, Lei’s car spilled oil and other fluids on the surface that had to be covered by the track staff.

Wong’s victory was without the flavour he had wanted and deserved, even as he was clearly the fastest driver on track over the racing weekend.