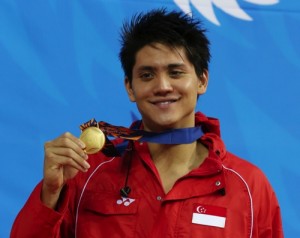 Joseph Schooling won Singapore’s first men’s swimming gold medal at the Asian Games in 32 years by cruising to victory in the 100-meter butterfly yesterday.
The early leader, Schooling held on 0.15 seconds ahead of Li Zhuhao of China for his second medal of the games, after a bronze in the 200 butterfly on Sunday.
Schooling said his success was a surprise, because he was in transition in training as a freshman at the University of Texas.
“It’s always good that you’re breaking records and you’re always surpassing milestones,” he said. “That’s one of the big things I think about before practice every day.”
Among the dominating Chinese swimmers, Shen Duo won the women’s 200 freestyle for her fourth gold, following the 100 free and two relay golds, and Jiao Liuyang won the women’s 200 butterfly, leaving London Olympics silver medalist Natsumi Hoshi of Japan in her wake.
The predicted highlight of the Asian Games swimming was framed as the rivalry between Sun Yang of China and Park Tae-hwan of South Korea, but Park has yet to win a race, and Kosuke Hagino of Japan has stolen much of the spotlight.
Hagino added gold to his silver and bronze when he won the 400 individual medley from China’s Yang Zhixian. Hagino says he’s using the Asian Games as a building block for the Olympics in 2016 and 2020, when they land in Tokyo.
“That’s why I’m challenging multiple swims. My goal is to continue to swim well in all events and get good results, and I hope to win many medals in the 2020 Games,” the 20-year-
old Hagino said. He’s entered six individual events at Incheon.
Sun and Park met again yesterday in the 4×100 freestyle relay that was won by China, with Japan second, and South Korea third. China holds a 15-8 lead over Japan in swimming golds.
Dmitry Balandin of Kazakhstan collected his second gold of the games in the 100 breaststroke, edging Pan Pacific Championships gold medalist Yasuhiro Koseki of Japan.
“I’m tired but I’m really happy, and I’m ready to do it again tomorrow in the 50,” Balandin said.
At the end of day five, with 136 of the 439 total gold medals awarded, China topped the table with 59, followed by South Korea with 26, and Japan with 20.
South Korea won four out of five golds in shooting, and North Korea’s Hong Un Jong won the women’s gymnastics vault.
China’s Zou Kai won the men’s floor exercise, Japan’s Masayoshi Yamamoto the pommel horse, China’s Yao Jinnan the uneven bars, and Liao Junlin the rings.
In baseball, South Korea scored seven unanswered runs in the first inning to shut out Taiwan 10-0, triggering the mercy rule in the eighth.
The games again courted controversy, when Qatar’s women’s basketball team forfeited a match against Mongolia and considered withdrawing from the games after its players were refused permission to wear a hijab.
There was confusion over recently relaxed headwear regulations aimed at making basketball more inclusive, but FIBA has allowed the rule, for now, only in domestic competitions, not international.
In the first doping case, Tajik football player Khurshed Beknazarov failed a drug test on Sept. 14, five days before the soccer competition kicked off. Beknazarov was disqualified. Christopher Bodeen, Incheon, AP