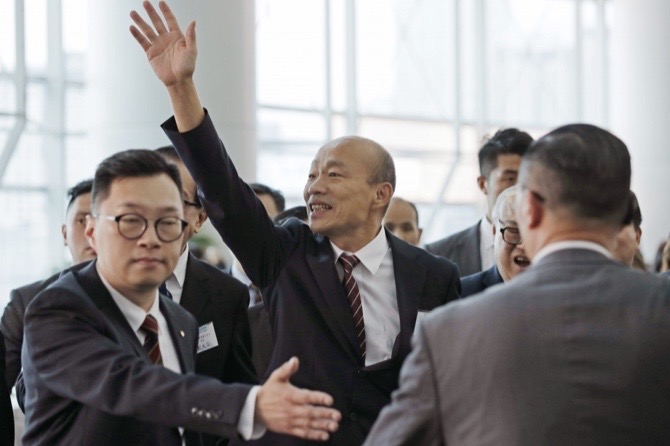 Mayor of Kaohsiung, Han Kuo-yu, whose visit to China, Hong Kong and Macau triggered protests in Taiwan on Sunday

Thousands of people in Kaohsiung, Taiwan, have protested the ‘one country, two systems’ principle on Freedom of Speech Day, held this week.

Freedom of Speech Day is a national holiday established in 2016 to commemorate a Taiwanese democratic activist who set himself on fire in 1989 to defend freedom of speech and protest the then-repressive regime of the Kuomintang.

The demonstration, held on Sunday, was titled ‘Rejecting one country, two systems and Building a New Country in Taiwan.’

It was organized by Citizen Front Taiwan and had the participation of several other groups, with approximately 2,000 to 3,000 people joining the demonstration.

The group, formed by several Taiwanese civil organizations, criticized the recent visit of mayor of Kaohsiung, Han Kuo- yu, to the Liaison Office in Hong Kong.

From March 22 to 28, the Kaohsiung mayor visited Macau, Hong Kong, and mainland cities Shenzhen and Xiamen.

The delegation, led by Han, also involved the signing of USD30 million worth of fruit and fishery product deals with Xiamen’s local enterprises. Han also visited the Liaison Office in Hong Kong, with the visit regarded by some as a betrayal of Taiwan.

The Economic Democracy Union said, “We expressed our rejection of the one country, two systems. We protest against Han Kuo-yu’s behavior, which betrayed Taiwan’s democracy.”

Sunflower Student Movement member, Lin Fei-fan, who also participated in the demonstration, said, “We believe that he entered the Liaison Office [because] there is a very clear goal in his heart – that is, in the international community, to show the world that there is a Taiwanese who supports one country, two systems.”

Another march participant, Nancy Wang, noted that Hong Kong people who refuse the 0ne country, two systems principle still have Taiwan to emigrate to. However, Taiwan does not have a pullback, and Taiwan is now in a state of war.

The one country, two systems principle is in force in the Special Administrative Regions of Hong Kong and Macau, permitting the two cities to govern themselves under a regime separate to that of the mainland. It was first designed by former China President Deng Xiaoping with a view to enticing Taiwan back to China via peaceful integration.

According to the latest survey released by the Cross-Strait Policy Association of Taiwan in January, more than 80 percent of the interviewed Taiwanese people expressed their disapproval of the one country, two systems principle.  JZ