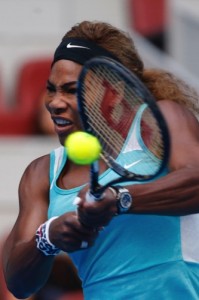 Serena Williams narrowly avoided a bagel against Spanish qualifier Silvia Soler-Espinosa, then won 13 of the next 15 games to pull out a 7-5, 6-2 victory yesterday in the first round of the China Open.
Williams looked lethargic and flat-footed at the start, pushing the ball back without much pace or direction and occasionally shanking groundstrokes several feet out. After only 15 minutes, she had already dropped serve three times and fallen behind 5-0.
Just as quickly as she gave up such a big lead, however, Williams turned it around. In the next game, the 18-time major winner saved a set point and broke Soler-Espinosa to finally get on the board.
“I didn’t want to lose 6-love,” Williams said. “I just started fighting. I was like, just let me at least try to break here.”
Soler-Espinosa had another set point on Williams’ serve in the following game, but the American saved it with a cross-court backhand winner at the net and cruised the rest of the way.
Williams routinely doles out the bagels in matches, but she’s rarely on the receiving end of one. The last player to win a 6-0 set against her was another Spaniard, Anabel Medina Garrigues, in Madrid last year. Williams came back to win that match, too, 6-3, 0-6, 7-5.
After the match, Williams said she hadn’t been sure she’d be healthy enough to play in Beijing after pulling out of a match against Alize Cornet with dizziness and nausea last week at the Wuhan Open.
“I just started hitting a couple days ago, taking it day by day. Finally I decided I’m here, I may as well see what happens,” Williams said. “I’m feeling a lot better. I have more energy. I look back. Like my eyes aren’t as dead as they were.”
It was the latest health issue to sidetrack Williams this year. She also pulled out of a Wimbledon doubles match after looking completely out of sorts in her warm-up and hitting four straight double-faults in the match. She later blamed a viral illness.
On the men’s side, U.S. Open champion Marin Cilic struggled with his consistency against Chinese wild-card entry Bai Yan, ranked 462nd in the world, but held on to win 6-3, 6-4.
Cilic said he’s still getting used to the feeling of being a Grand Slam champion and dealing with all the pressure and attention that brings.
“Most of the guys at the top are dealing with that already for a few years. It’s a bit new thing for me, so I’m learning day to day,” he said. “Most important for myself is also not to put too many expectations on my own shoulders.”
Other winners included ninth-seeded Ana Ivanovic, who took advantage of eight double-faults by Belinda Bencic to beat the rising Swiss teenager 6-2, 6-1, and U.S. Open semifinalist Peng Shuai of China, who defeated Zhang Kailin 6-4, 6-1.
Fourteen-time major winner Rafael Nadal also returned to the court for the first time since injuring his wrist in July to play a doubles match. He and partner Pablo Andujar lost to Tomas Berdych and John Isner 7-5, 4-6, 10-4.
Nadal will play his opening singles match against Richard Gasquet, while top-seeded Novak Djokovic faces Guillermo Garcia-Lopez. Justin Bergman, Beijing
AP