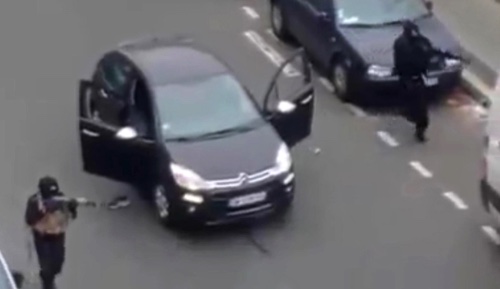 Kalashnikov assault rifles. Plenty of ammunition. Molotov cocktails, a grenade, a death-dealing Skorpion machine pistol and a few handguns. Plus a revolving light that could be placed on a car roof to make it look like an undercover police car.
The list of weapons— along with a jihadi flag — carried by the French Muslim terrorists who launched the Charlie Hebdo attacks is frightening, especially given al-Qaida’s warning of further such assaults. And it also represents a striking change for western Europe, where gun crime is far more rare than in the United States.
The relatively heavy weaponry — a staple of recent attacks — seems to indicate that terrorist networks are moving away from bombs in favor of military-grade assault rifles and machine guns backed by smaller automatic pistols.
Gun attacks spread a different kind of terror than bombings: more personal, more focused, and able to be drawn out into the kind of protracted urban drama that seizes a society’s attention for days. Even in Europe, guns can be easier to acquire, transport and conceal than explosives.
The mini-arsenal police found after the final shootout with brothers Cherif and Said Kouachi even included an advanced rocket launcher — with a loaded rocket ready for firing.
The movement toward use of heavy weaponry instead of bombs was evident with the 2012 attack that killed three Jewish schoolchildren, a rabbi, and three paratroopers in Toulouse, France — as well as the 2014 killing of four people at the Jewish Museum in Brussels by an extremist with a Kalashnikov.
“The violence is becoming more focused at specific groups, Jewish targets, military targets, police targets, and they are using complex multiple armed assaults that are just as effective and much easier to do than explosive devices,” said Magnus Ranstorp, a terrorism specialist with the Swedish National Defense College.
He said the trend started when terrorist strategists saw the relative success of the 2008 raid in Mumbai. A small group of well-armed, well-trained commandos was able to paralyze a major city for several days, leaving more than 160 dead. Counter-terrorism officials warned at the time that the successful tactics would catch the eye of other plotters looking for a more reliable alternative to homemade explosive devices.
Western intelligence agencies fear terrorists may now be plotting still more attacks using relatively simple, low-tech tools.
Denmark’s Security and Intelligence Service had acknowledged in its latest terror assessment that plotters can find “easily accessible weapons” including knives, small arms and small bombs, inside Denmark for use in attacks.
The use of bombs has become more problematic in recent years as European law enforcement officials have greatly increased tracking of precursor chemicals that can be used to make explosives. Bombs carry a high risk of detection when the components are being assembled, and they are inherently unstable and often malfunction, with deadly results for the hapless bomb makers.
In contrast, it is relatively easy for terrorists with underworld connections to obtain heavy weapons on the black market, particularly in the Balkan countries of Bosnia, Serbia and Croatia.
Following the collapse of the Soviet Union, hundreds of thousands of heavy weapons became available at black market arms bazaars in Hungary and other former Soviet bloc countries. Those weapons helped fuel the Balkan wars, and are still available today for buyers with good connections and ample cash. More than 500,000 weapons were also stolen from Albanian arms depots in 1997, adding to the black market flow.
European Commission documents indicate that nearly 500,000 other weapons lost or stolen within the European Union remain unaccounted for, and cite an increase in the number of civilian and military weapons stolen in France.
A 2013 report states that “large amounts of powerful military grade weapons” have reached the European Union since the collapse of the Soviet bloc and the fighting in the Balkans. The weapons are often smuggled in cars or buses in small quantities to avoid detection. It also says upheavals in the Middle East and North Africa may make more stolen or surplus military weapons available to Europe’s criminal gangs.
Still, it takes planning and care to transport weapons from the Balkans or eastern Europe into western Europe and particularly into Britain, which as an island can more easily monitor points of entry.
Britain, which has warned police officers they are likely targets of terror plotters, recently broke up a scheme to get weaponry to terrorists plotters.
Italy, with its strong Mafia tradition, is seen as a likely conduit for heavy weapons heading toward France and other points in western Europe even though assault weapons use there is very rare.
Ranieri de Maria, a legal expert for the National Association of Arms and Munitions producers in Italy, said he believes Italy is used by weapons traffickers as “a transit country between the Balkans and Europe.” Even so, he noted, “it has been a number of years since there has been any attack with an assault weapon.”
Morten Storm, a Dane who claims to have infiltrated al-Qaida in Yemen on behalf of western intelligence agencies, said he believes the Charlie Hebdo plotters had been laying low inside France while “waiting for the arms and weapons for the attack.”
It was evident from video of the initial assault that the attackers were well trained in weapons use. They did not make emotional “rookie” mistakes like spraying the premises with automatic weapons fire but instead carried out the killings quickly and efficiently.
The concern, for Europeans, is that a pattern might emerge: hundreds of jihadis have returned to their home countries on the continent after receiving weapons training in Syria and other conflict zones. Gregory Katz, London, AP