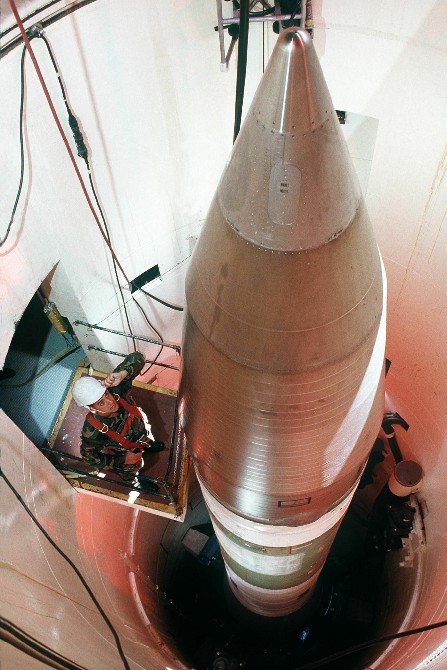 The locations for the first US nuclear cruise missiles to be stored on British soil have been revealed by the government.
Secretary of State for Defence Francis Pym told the House of Commons the 160 missiles would be located at RAF Greenham Common, Berkshire, and the disused RAF Molesworth in Cambridgeshire.
Mr Pym said neither of the bases would be used as a launch site. In times of crisis the American-owned warheads will be moved to secret launching sites within 50 miles (80 km) of their storage silos.
Although there is no “dual-key” system to launch the weapons, the minister assured the Commons the United States would not use them in an attack without Britain’s assent.
The ground-launched missiles will be stored in purpose-built shelters and security will be considerably upgraded at both sites.
The UK will contribute 220 personnel to help guard the bases and the cost to the country will be £16m.
In an attempt to reassure local communities, Mr Pym said nuclear warheads would not be carried on exercises and no test flying would take place.
But the military would regularly practice the dispersal of the weapons to their launch sites after consultation with local authorities.
Most of the missiles will be stored at the Greenham Common base.
Residents in nearby Newbury vigorously opposed the basing of noisy tanker aircraft so close to them, but seemed resigned to the arrival of the American arms.
“If it has to be – so be it,” said the District Council Chairman.

Protests against the decision to use the base for cruise missiles began in the summer of 1981.
The women’s peace camp that remained there for almost 20 years became one of the most enduring symbols of the campaign against nuclear weapons.
Missiles were kept at the base from November 1983 to March 1991 when the 1987 Intermediate Nuclear Forces Treaty started a gradual process of nuclear disarmament.
The women finally dismantled their peace camp in September 2000.