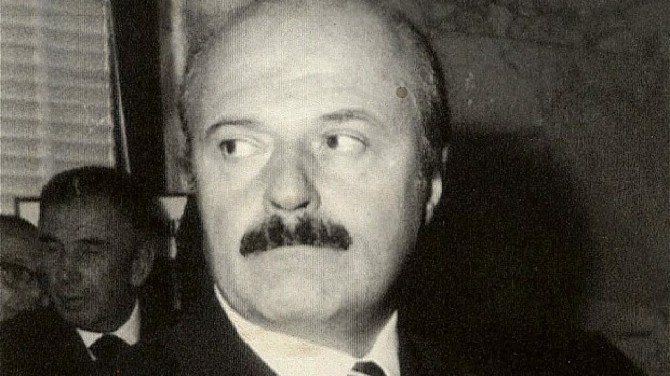 The body of a top Italian banker has been found hanging from Blackfriars Bridge in London.
Known as God’s banker for his links with the Vatican, 62-year-old Roberto Calvi was the chairman of Banco Ambrosiano in Milan and a central figure in a complex web of international fraud and intrigue.
He had been missing for the last nine days before his body was discovered by a passer-by hanging from scaffolding on a riverside walk under the bridge.
Police are treating the death as suicide.
Mr Calvi became chairman of Banco Ambrosiano, now Italy’s largest private bank, in 1975 and built up a vast financial empire.
In 1978, a report by the Bank of Italy on Ambrosiano concluded that several billion lire had been illegally exported.
In May 1981, Mr Calvi was arrested, found guilty, and sentenced to four years’ imprisonment, but released pending an appeal. During his short spell in jail he attempted suicide.
Mr Calvi was due to appear in an Italian court next week to appeal against this conviction.
Later this month he was to be tried for alleged fraud involving property deals with Sicilian banker Michele Sindona, who is himself serving 25 years in America over the collapse of the Franklin National Bank in New York in 1974.
The Vatican is directly linked to Mr Calvi by Archbishop Paul Marcinkus, the Pope’s bodyguard, a governor of the Vatican and head of the Vatican bank which has a shareholding in Ambrosiano.
Now Ambrosiano is on the verge of collapse amid press reports that investigators found a £400m “hole” in its accounts. Last week the bank’s executive board decided to strip Mr Calvi of his authority.
The Italian Treasury dissolved the bank’s administration and the Bank of Italy is now a temporary commissioner.
Mr Calvi fled to Venice nine days ago after shaving his moustache to avoid being recognised.
From there it seems he hired a private plane to take him to London.
The day before he was found dead, his secretary committed suicide in Milan by jumping off the fourth floor of the bank’s headquarters.
Teresa Corrocher, aged 55, left an angry suicide note condemning her boss for the damage she said he had done to Ambrosiano and its employees.

It was later revealed that Roberto Calvi was found with five bricks in his pockets and had in his possession about $14,000 in three different currencies.
On 23 July an inquest jury returned a verdict of suicide. This was overturned in 1983 when a second inquest delivered an open verdict on the death.
In October 2002 forensic experts appointed by Italian judges concluded that the banker had been murdered.
They said his neck showed no evidence of the injuries usually associated with death by hanging and his hands had never touched the stones found in the pockets of his clothes. American Archbishop Paul Marcinkus was sought for questioning but was granted immunity as a Vatican employee. He retired in 1990 and died in 2006.
In October 2005 five people went on trial in Rome. They were Sardinian financier Flavio Carboni, his former girlfriend Manuela Kleinszig, Roman entrepreneur Ernesto Diotallevi, Calvi’s former bodyguard, Silvano Vittor and convicted Cosa Nostra treasurer Pippo Calo.
They were acquitted in June 2007.