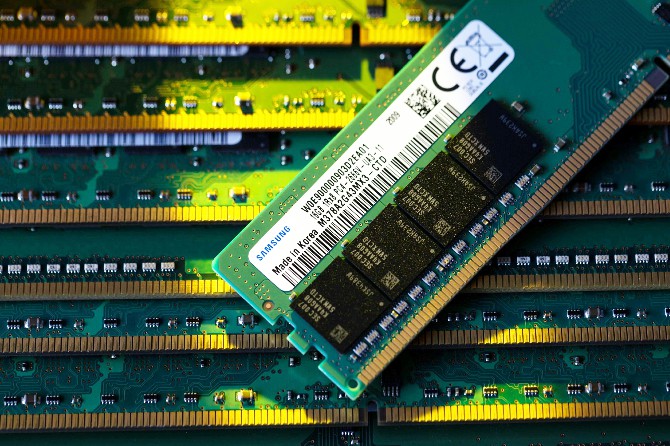 Dozens of senior Chinese government officials and business leaders gathered at the 2020 World Semiconductor Conference last week, but their usual agenda of trumpeting the nation’s chip innovation was colored by fears their industry might be next to suffer trade sanctions from the Trump administration.
The White House’s campaign to contain China’s tech ascendancy has already shaken up the world’s technology supply chain and further restrictions would seriously set back China’s still-developing chip industry, executives including Legend Capital Co.’s Arthur Ge and Wang Xuguang, chief executive officer of AINSTEC, said at the conference last week. That’s despite the resiliency in China’s chip demand, which has been supported by a recovery in manufacturing following disruptions during the coronavirus pandemic.
“If the U.S. further hit key areas of Chinese tech industry, for example the advanced chip manufacturing, the impact would be devastating,” said Ge, managing director of Legend Capital, an investment arm of the parent of Lenovo Group Ltd.
The White House this month slapped new restrictions on exports to Huawei Technologies Co. amid an escalating standoff between the two largest economies that has already ensnared other Chinese tech giants like Tencent Holdings Ltd. and ByteDance Ltd. The latest rules required any chip companies using U.S. technologies to seek licenses before working for Huawei, effectively closing off the loopholes that the Chinese corporation had explored after earlier curbs that threatened the survival of its chipmaking unit HiSilicon.
The U.S. is considering new restrictions on exports of semiconductor manufacturing equipment and associated software tools, lasers, sensors and other technology, Reuters reported last week. Already, Synopsys Inc., the Mountain View, California-based provider of electronic design automation (EDA) tools, has suspended cooperation with Huawei following the U.S. curbs, China Chairman Ge Qun said at the conference.
“The entire chip industry is too fragile to defend itself. We are at least 20 years behind comparing to Silicon Valley from scale and quality of talent to size of the ecosystem,” said Wang of AINSTEC, a Suzhou-based company that develops 3D visual chips. “If we can prosper [with the U.S.], that’s the best, but if the situation doesn’t allow this to happen, we need to think what we have on our hands.”
For its part, the Chinese government has stepped up efforts to defend domestic tech companies and increase the industry’s self-sufficiency. This month, it rolled out a series of measures that include tax breaks, tariff exemptions and investment incentives to bolster chipmakers and software producers.
Local corporations are also boosting investments in research and development, with state-backed Tsinghua Unigroup building a $22 billion memory chip plant in the city of Wuhan. Semiconductor Manufacturing International Corp. recently completed a secondary listing in Shanghai, raising more than $7.6 billion that would be used to develop next-generation chipmaking technologies to compete with rivals like Taiwan Semiconductor Manufacturing Co. Tsinghua Unigroup and SMIC, along with HiSilicon and Cambricon Technologies Corp., are among a handful of homegrown firms that are engaged in advanced chip manufacturing.
“Although no one wants to say this, the world is approaching a new cold war era. I’m afraid this trend will get stronger in the future,” said Li Xing, co-founder of Beijing-based private equity company V Fund and a former Goldman Sachs Group Inc. executive. “However, the challenge could become an opportunity for the industry” as China seeks local replacements. Bloomberg