Ukraine crisis | Putin to meet with Western leaders in Milan 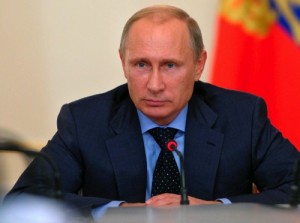 Russian President Vladimir Putin is mounting a diplomatic blitz on the sidelines of a summit of European and Asian leaders that opened yesterday in a bid to escape the worst crisis with the West since the Cold War.
Putin will discuss Ukraine during a working breakfast with Ukrainian President Petro Poroshenko and key European leaders on the sidelines of the 10th ASEM summit. He may also meet privately with Poroshenko.
The trip offers Putin the first chance to discuss the Ukrainian crisis with EU leaders since his visit to France in June to attend the D-Day anniversary.
The West has imposed a series of economic sanctions against Russia since its annexation of the Crimean Peninsula in March.
German Chancellor Angela Merkel said she expects to discuss the fulfillment of a cease-fire deal signed last month, which has reduced hostilities but failed to stop all fighting — an impediment to removing the sanctions.
Putin’s arrival in Milan was spurring protests before the summit.
Two members of the feminist group Femen protested outside Milan’s cathedral, baring their breasts as they demanded an end to bloodshed in Ukraine. Separately, a small protest marched through the city.
European and Asian leaders are gathering in Milan for the 10th ASEM summit, which aims to forge closer economic and cultural ties and confront common threats.
The two-day summit opens against the backdrop of the ongoing conflict in Ukraine, student protests in Hong Kong and escalating concerns about the Ebola virus.
The biannual gathering, launched in 1996, aims to deepen economic and cultural exchanges between European and Asian nations while confronting common concerns. It also offers an informal venue to tackle bilateral issues.
Poroshenko, who spoke by telephone with Putin earlier in the week, said he is hopeful of progress in Milan. Vladimir Isachenkov and Colleen Barry, Milan , AP