What did you say? Tourists fuel pocket translator boom in Japan 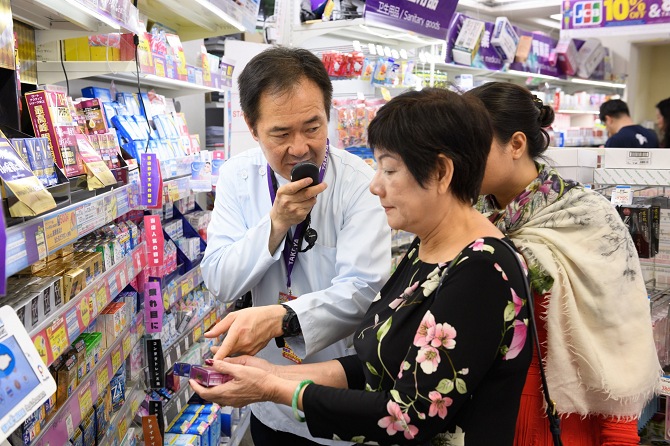 Takehiko Fujita wouldn’t be able to do his job selling eye drops and pain relievers without his pocket translator.
Instead of an app, language dictionary, or call-in translation service, the clerk in a Japanese drugstore uses Pocketalk, a 25,000 yen ($230) device made by Sourcenext Corp. that looks like an oval puck. The gadget translates phrases to and from 74 languages, helping Fujita communicate with customers from Sweden, Vietnam and other countries.
Tourists are flooding into Japan, with 31 million people visiting the archipelago in 2018, triple the number six years earlier, according to the Japan National Tourism Organization. Businesses are struggling with visitors looking to shop, eat and move around — a situation that will probably worsen during next year’s Tokyo Olympics. Seeking to tap into demand, electronics maker Fujitsu Ltd. and office supplier King Jim Co. are challenging Pocketalk’s 94% market share with their own products.
“I’m not worried anymore,” said Fujita, who works at a Takeya store in Tokyo’s Okachimachi area. He used to rely on Google Translate to talk to customers, but now he picks up the Pocketalk dangling from his neck to chat with people. “I can speak to people who, at first glance, come from foreign countries and might not understand me.”
While smartphone apps remain a popular — and common — translation tool, Pocketalk has carved out its own niche. Dedicated for just one purpose, the gadget has a sensitive microphone, and accesses machine translation and voice-recognition software from Google, Baidu and others, improving accuracy. More than 500,000 Pocketalk units have been sold since it debuted in 2017.
Formerly a developer of greeting-card design software, Sourcenext collaborated with Dutch startup Travis, which had already developed a translator prototype, to create Pocketalk. Additionally, Sourcenext used expertise from Rosetta Stone Inc.’s Japan unit, which it bought in April 2017.
Sourcenext is also targeting outbound Japanese tourists. Japan remains a relatively monolingual country, ranking 49th among 88 countries and regions in terms of English proficiency. A new Pocketalk model features a built-in global SIM card that’s active for two years in more than 100 countries, which lets the device access data to process translations.
“With this tool, tourists are able to do things they couldn’t before,” said Hajime Kawatake, senior software designer at Sourcenext. There’s now growing interest from businesses in Japan that deal with foreigners, he said, adding that Sourcenext has received inquiries from more than 4,000 companies.
Pocketalk’s success has helped to fuel a boom in Sourcenext’s shares. The stock has more than doubled since the device debuted in 2017. Revenue climbed 55% to 14.7 billion yen in the latest fiscal year that ended in March. Operating profit fell 31% to 860 million yen, however, as the company spent aggressively on marketing and advertising to defend market share.
Fujitsu has been marketing its own translator, called Arrows Hello. The 30,000 yen product, on sale since May and similar in shape to the Pocketalk, is different because it has a camera that also translates text. Demand is particularly high among retailers as well as the transportation sector including taxi companies, according to Hiroshi Tamura, general sales manager at Fujitsu Connected Technologies.
The market for language translators may be larger “than what we expect,” Tamura said.
King Jim, which sells office stationery and supplies, released a desktop translator for stores on July 19. Called World Speak and priced at 148,000 yen, the device has two displays, one for the customer and another for store clerks. Shoppers can select their national flag on a screen to start translating in their native language.
“Seeing so many foreign tourists and residents these days, we’re seeking to break the language barrier with our product,” said Masatoshi Takao, King Jim’s assistant research and development manager. Phrases are translated and delivered as audio, as well as on World Speak’s panel. Hotels, shopping complexes, hospitals and pharmacies have expressed interest in World Speak, which handles 72 languages, he said.
“Now that Japan is a tourist destination, there’s no excuse for businesses to say ‘We don’t understand foreigners,’” said Eiji Mori, chief analyst at market researcher BCN. “They need to grow revenue, so translators will keep growing.” Kantaro Komiya, Bloomberg