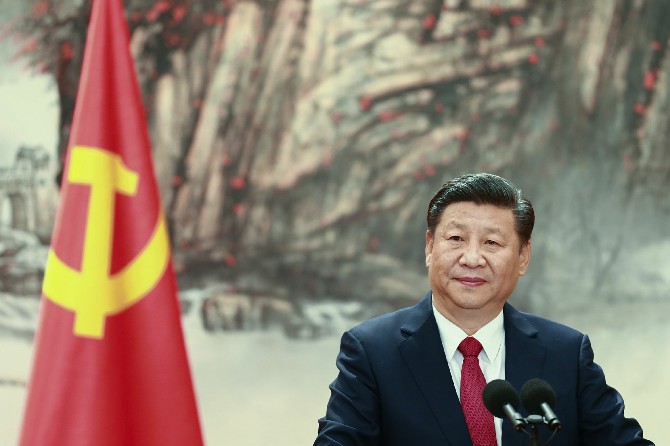 Chinese President Xi Jinping said nothing will come between the Chinese people and the Communist Party that has governed them for more than 70 years, setting a defiant tone in the face of criticism from the U.S.
Speaking at an event marking the 75th anniversary of Japan’s formal surrender at the end of World War Two, Xi outlined areas where China would “never” accept foreign interference. He took aim in particular at threats to the Chinese Communist Party’s continued one-party rule.
“The Chinese people will never allow any individual or any force to separate the CCP and Chinese people, and to pitch them against each other,” Xi said. “The Chinese people will never allow any individual or any force to distort the CCP’s history, and to vilify the CCP’s character and purpose.”
While Xi didn’t specifically mention the U.S. in the public excerpts of his remarks, Foreign Ministry spokeswoman Hua Chunying told reporters Friday that U.S. officials including Secretary of State Michael Pompeo should study them.
“I would suggest Pompeo and other American politicians read President Xi’s speech,” Hua said, citing the five elements China would never allow. “For the extreme anti-China forces in the U.S. who are viciously trying to smear the CPC, and trying to sow discord between CPC and the Chinese people, these are the best answer to them.”
The combative tone of Xi’s speech highlights how seriously China’s leaders take the threat of external challenges to their rule. Pompeo has repeatedly sought to differentiate between the Communist Party and the Chinese people in critical remarks of the regime, including a speech in July at the Richard Nixon Presidential library in California.
“General Secretary Xi is not destined to tyrannize inside and outside of China forever, unless we allow it,” Pompeo said at the time.
Chinese officials have attacked Pompeo daily in recent months, with Hua calling him a “habitual liar”. Chinese diplomats have also accused the U.S. and its supporters of attempting to deepen the political divides between Beijing and places like Taiwan and Hong Kong.
Chinese leaders have stressed the Communist Party’s ability to stand up to foreign aggression since they won control after World War II. As Xi has sought to strengthen his grip at home and confront a more hostile U.S., he has frequently turned to similar nationalist themes. Bloomberg