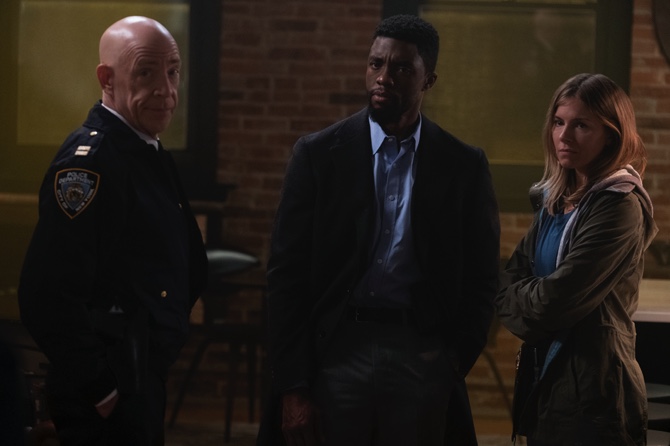 From left, J.K. Simmons, Chadwick Boseman and Sienna Miller in a scene from “21 Bridges”

How excited James Brown would have been for “21 Bridges.” Take you to bridge? How about 21 of them?

But I suspect even the Godfather of Soul would give an easy pass to Brian Kirk’s “21 Bridges,” with Chadwick Boseman (who played Brown in the biopic “Get on Up”). It’s a just-good-enough New York crime thriller, made with sufficient slinky shadows and leading-man charisma to do the trick. Even if its best trick is informing you, in case you ever wondered, how many bridges there are crossing into Manhattan.

The filmmakers, themselves, very nearly got it wrong. The movie’s original title was “17 Bridges.” Accounting errors are one thing, but misplacing the Queensboro Bridge plus three more doesn’t exactly engender confidence in the entire enterprise.

The story is simple, even if the arithmetic isn’t. A drug heist goes awry leaving seven cops dead. Andre Davis (Boseman) is put in charge of the investigation, largely because of his shoot-first reputation. The son of a slain officer, Davis has shot eight people in nine years. He’s known as “a trigger.” And no in the force will mind if this case ends with bloodshed.

With the two suspects believed to be in Manhattan, thanks to an image of them running a light from an overhead camera, Davis orders the most audacious dragnet in the history of dragnets: He shuts down Manhattan for the night, stopping all trains and ferries, shuttering the tunnels and, yes, closing all 21 bridges.

Now, Manhattan isn’t actually a medieval castle that protects itself by moat. Believe it not, there are holes in this plan. For starters, you can just about skip a stone across the Harlem River to the Bronx. Sealing off a sprawling metropolis like Manhattan would be such a mammoth undertaking that I wish “21 Bridges” dropped the plot and instead turned its focus to hysterical transit authority officials. It could have been one very entertaining traffic report.

But if the movie’s central conceit — putting Manhattan on lockdown — is laughably implausible, Kirk (who has largely worked in television) nevertheless invests his movie with some genre muscle and noirish atmosphere. The whole film takes place at night, as Davis and the narcotics officer he’s paired with (Sienna Miller) hunt their shooters.

The film tells it both from the detectives’ perspective and the criminals (a pair of veterans played by Stephan James and Taylor Kitsch), who stumbled into 300 kilograms of uncut cocaine when expecting a more small-time heist. That police were casually on the scene at the time adds to the mystery that unfolds while Davis steadily closes in.

With J.K. Simmons playing a suspicious NYPD captain, it’s dispiritingly easy to see where “21 Bridges” is heading. But the quality of the actors — particularly James (“If Beale Street Could Talk”) and a nearly unrecognizable Kitsch — gives “21 Bridges” a heft that its generic story doesn’t deserve. Most of all, Boseman smoothly presides over the movie with poise and command, a fine movie star finally unencumbered by both the dictates of Marvel and the pressures of the biopic. (Though “Avengers: Endgame” directors Joe and Anthony Russo are producers.)

The sanitizing of Manhattan hasn’t been good for the New York crime movie. There are still pockets of scuzzy inspiration to be found (see: the Safdie brothers’ “Good Time”). But, for better or worse, the New York of “The French Connection” may be long gone. “21 Bridges” briefly alludes to that, but it’s wholly unconnected — despite being a movie starring a gun-slinging police officer — to today’s debates of excessive force. “21 Bridges” is well crafted enough to pass the time, but anything more than that is a bridge too far. Jake Coyle, AP Film Writer

“21 Bridges,” an STXfilms release, is rated R by the Motion Picture Association of America for violence and language throughout. Running time:  100 minutes.