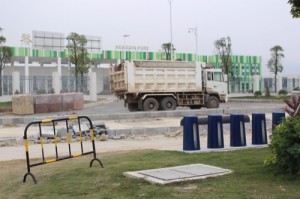 Cotai’s casino resorts are set to benefit from new border crossing rules, according to analysts and operators.
Last week, the Macau government announced that the Lotus Bridge border, connecting with Hengqin, will be operating around the clock from December 18, while opening hours for the Border Gate  will be extended, with the border checkpoint opening at 6 am and closing at 1 am.
The Zhuhai-Macau Cross-Border Industrial Zone checkpoint, located in the Ilha Verde, will be open to Macau residents, non-resident workers and students between midnight and 7am the next morning.
Barclays’ analysts believe that “[the extension of border crossing hours] could be positive in terms of the number of hours spent at gaming tables by same-day travelers, and, potentially, for casino operator revenues,” CNBC reported.
Sands China told the Times that it welcomes the new border crossing hours and “is confident that it will have a positive impact on Macau’s tourism industry,” as well as on “increasing visitation to Sands China properties.”
Other casino companies operating near the Hengqin border did not reply to Macau’s enquiries about the new crossing hours before press time.
Analysts believe that new border crossing rules could be “heaven-sent” as Macau’s casino market experiences a  fifth consecutive month of declining gaming revenue this October.
Fitch Ratings recently forecast a one percent contraction for 2015, due to a slump among the VIP segment.
Analysts at Citi Research also agree that the extension of border checkpoint operating hours will translate into more time spent at casino tables, acting as the first catalyst for Macau since visitors from Guangdong province started providing for about 40 percent of total mainland visitors.
Barclays analysts believe that new border crossing rules will have an impact in the long run rather than in the short term. “The changes to the Hengqin border would likely have a limited near-term impact, in our view, but could be positive in the long run as Hengqin’s development projects are completed and potentially attract more residents and visitors to the area,” they added.
Analysts are confident that longer operating hours at Macau’s borders will have an impact on the cooling off of the real estate market, with a possible decline in the usual skyrocketing housing prices.
“We believe the progressive extension of border crossing hours could help alleviate Macau’s housing shortage and housing price inflation problems, as some employees could choose to reside in China and cross the border to Macau for work,” Barclays said, as quoted directly by American television channel CNBC.
Lawmaker Melinda Chan shared a similar opinion during last weekend’s TDM Forum.
She believes that the new operating hours on Macau’s borders will encourage non-
resident workers from the mainland to live across the border, which will ultimately contribute to reduced rental prices in Macau.
Ms Chan welcomed new rules on border crossing hours “as gamblers can stay longer but [still] leave Macau on the same day.”
“[With a] 24-hour border crossing, they can gamble all the way until midnight and then leave. The next day they can go to work, and after finishing work they can come again and gamble. This is good for the gaming industry,” she stated.
In a press conference last week, the Public Security Police (PSP) said  that the number of border-checking channels and personnel working will be increased accordingly.
Separately, the Transport Bureau’s deputy director, Chiang Ngoc Vai, stressed that they will also increase the number of buses heading to the borders, while also heading one more night bus line.