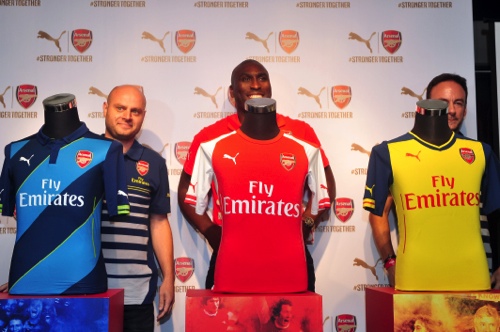 Arsenal and Porto are among the big clubs entering the Champions League qualifying campaign when the draw for the last-round playoffs is held today.
Arsenal, chasing a 17th straight group-stage campaign, and two-time European champion Porto are the highest-ranked teams in the 20-team draw.
They are seeded with Zenit St. Petersburg, 2002 runner-
up Bayer Leverkusen and Napoli in the section for teams which are not national champions.
Their unseeded opponents are Athletic Bilbao, Lille, Copenhagen, Standard Liege and Besiktas. The Turkish club advanced from the third qualifying round Wednesday with a hat trick from former Chelsea forward Demba Ba to beat Feyenoord 3-1 and complete a 5-2 aggregate win.
“He is not 100 percent but fit to play,” Besiktas coach Slaven Bilic said of his new signing.
Clubs from the top five leagues in UEFA’s rankings — Spain, England, Germany, Italy and Portugal — join in the fourth and final qualifying round, with two-leg matches scheduled for Aug. 19-20 and Aug. 26-27.
In the champions section, 1986 European Cup winner Steaua Bucharest is seeded with Salzburg, APOEL, BATE Borisov and Ludogorets Razgrad.
Potential opponents are Maribor, Legia Warsaw, Slovan Bratislava, 1979 runner-up Malmo and Aalborg.
Playoff winners join the 22 clubs directly qualified for the group stage. The eight four-team groups are drawn Aug. 28 in Monaco.
The 10 playoff losers enter the second-tier Europa League group stage, drawn Aug. 29.
Though each playoff team gets 2.1 million euros ($2.8 million) form UEFA, the real prize — in status and cash — comes in the six-match Champions League group stage which kicks off in September.
UEFA pays a basic 8.6 million euros ($11.5 million) fee for reaching group stage, plus 1 million euros ($1.34 million) per win and 500,000 euros ($670,000) per draw.
Teams also get a share of television rights money in a near 1 billion euros ($1.34 billion) payout shared by the 32 group teams.
Arsenal’s streak of claiming a share of that bonanza started in the 1998-99 season.
Zenit was fined 6 million euros ($8 million) of its prize money last season by UEFA for breaching Financial Fair Play rules, and is restricted to registering only 22 senior players in this year’s competition instead of the usual 25-man squad.
Led by former Porto and Chelsea coach Andre Villas-Boas, Zenit got two late goals Wednesday to beat AEL Limassol 3-0 and advance 3-1 on aggregate.
In the champions section Wednesday, Legia routed group-stage regular Celtic 6-1 on aggregate, and perennial qualifier Dinamo Zagreb was stunned at home by Aalborg.
Danish champion Aalborg is the lowest ranked of the 20 playoff teams, earning its place with a 2-0 win in Zagreb, to advance 2-1 on aggregate.
Copenhagen, the Danish league runner-up, also advanced with a 2-0 second-leg win over Dnipro of Ukraine to remove one security problem from the Champions League.
UEFA has deemed some Ukraine cities, including Dnipropetrovsk, unsafe to host matches during ongoing conflict with pro-Russian separatist rebels, and currently prohibits Ukraine vs. Russia matches in its club competitions.
Malmo’s return to Europe’s elite links the competition to its 1970s heyday dominated by Ajax, Bayern Munich and Liverpool, which all feature in the groups draw
The Swedish champion was not a fully professional club when it lost the 1979 European Cup final to England’s Nottingham Forest, and has never played in a Champions League group.
Malmo advanced Wednesday when Markus Rosenberg scored twice in a 2-0 home win against Sparta Prague, enough to advance on away goals after losing the first leg 4-2.
“Winning a match like this for this club, of course it’s special,” Rosenberg said. AP