A semi-private viewing of Ronaldo as Italian soccer resumes 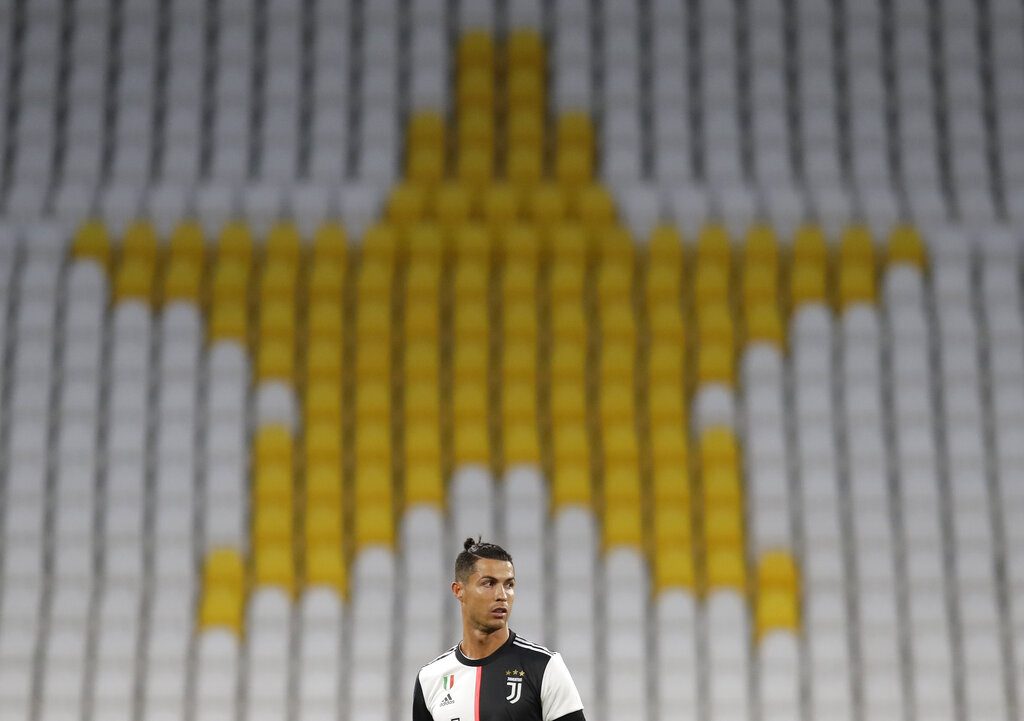 Juventus’ Cristiano Ronaldo stands in front of the empty stands during an Italian Cup second leg soccer match between Juventus and AC Milan at the Allianz stadium, in Turin (AP Photo/Luca Bruno)

TURIN — Cristiano Ronaldo bellowed out a loud expletive when he missed a chance at the end of the first half in Italy’s first soccer match in more than three months. Everyone in the huge, empty stadium, all 300 or so of us, could hear it plain as day.
As a reporter for The Associated Press, I was one of only 10 journalists allowed into the Allianz Stadium on Friday for the Italian Cup match between Juventus and AC Milan. It finished in a 0-0 draw, good enough for Juventus to advance to the final on away goals.
The first leg, a 1-1 draw in Milan, was played in February, shortly before the coronavirus pandemic shut down sports around the world.
But after more than 34,000 deaths in Italy related to the virus and 95 days without soccer, the ball was rolling again.
Seeing Ronaldo play is always an experience. Like watching Lionel Messi, or Johan Cruyff, or Diego Maradona, or Pele, seeing Ronaldo in person is something you’ll be able to tell your kids about. Something you can regale friends and family with at parties. And having this semi-private viewing was especially special.
He didn’t score and, actually, didn’t even look like he was match fit after the long layoff. But no one on the field looked particularly ready to get back to playing high-level soccer.
Ronaldo’s frustration was even more obvious because of the stark emptiness of the stadium, where the voices of the players echoed into the eeriness.
The entire experience felt strange from start to finish. There was hardly any traffic around the stadium, which is normally heaving on matchdays, and the new rules for reporters once inside threw my usual routine into disarray.
Different entrances, temperature checks and a one-way system as soon as you went through the stadium gates all made for a surreal experience. And as I went to get the red wristband signifying I had completed all the checks, there was a security guard there to reprimand me for walking the wrong way toward the checkpoint.
Once I got into view of the field, chills came not from the thousands of cheering and singing fans but from the void left in their place. Still, though, the stadium announcer introduced the home team with the usual booming “Ladies and gentlemen … Juventus Football Club.”
This time, it was followed by a resounding silence.
Once the match started, applause and jeers from the team benches could be clearly heard, most noticeably after a penalty incident in the 15th minute. But those cheers on the Juventus bench turned to loud groans when Ronaldo hit the left post with his spot kick.
At the same time, the Milan bench erupted to celebrate the miss. But before they could even retake their seats, Milan forward Ante Rebić was sent off for a high challenge on Juventus defender Danilo.
After the match ended, as journalists usually scramble to ask the coach questions in the news conference or speak to the players as they exit the stadium, we were told to stay in our seats. The players were able to leave without being mobbed by reporters and the coaches answered questions via a video link.
Juventus coach Mauricio Sarri was asked about the game, asked about Ronaldo, asked about other soccer details.
But he also spoke about the virus, and how the pandemic has affected the lives of Italians.
“When you wait every evening for the report to see how many people died, it’s a hard and sad moment. Sometimes you know people among those deaths,” Sarri said. “I still have in my mind those moments in which I would sit in the garden and hear continuously the sound of ambulances.”
MDT/AP
By DANIELLA MATAR, TURIN