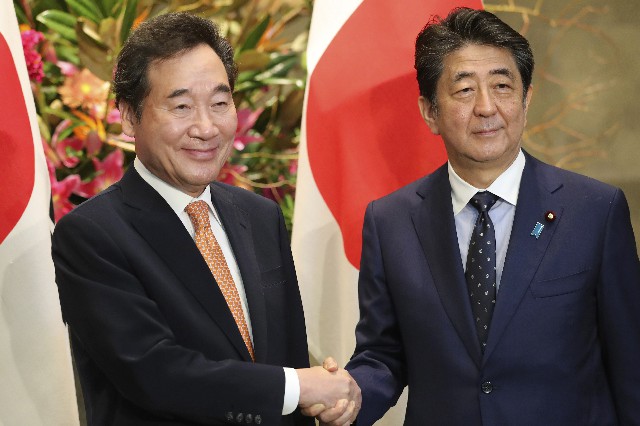 Japan’s prime minister and South Korea’s No. 2 official agreed on the importance of improving ties but made no apparent breakthrough yesterday in the first high-level meeting since the neighbors’ relations nosedived over trade and history disputes.
South Korea’s Prime Minister Lee Nak-yon handed Shinzo Abe a letter from South Korean President Moon Jae-in during the talks. Lee attended Emperor Naruhito’s enthronement ceremony Tuesday before meeting with Abe. Lee is the most senior official after Moon but his role is largely ceremonial.
An official in Seoul said Moon’s personal letter congratulated Japan on the new imperial era of Reiwa and wished for an improvement in bilateral ties. Abe expressed his gratitude for the letter, according to South Korea’s first vice foreign minister, Cho Sei-yong, who spoke in a television briefing after the meeting ended.
Cho said Lee and Abe agreed the two countries must improve their ties and that coordination between them and with Washington was important. Lee called for promoting diverse communications and exchanges to try to resolve their frayed ties, Cho said.
Abe told Lee that such cooperation is crucial as they face North Korean nuclear and missile threats, according to the Japanese Foreign Ministry. Abe said the currently strained relations should be mended, but Seoul should take the first step.
The meeting was closely monitored for signs of a thaw, but little progress was apparent except for an agreement to keep talking.
Still, Chief Cabinet Secretary Yoshihide Suga said the talks were “meaningful” as the two sides exchanged views and reassured that their efforts are continuing.
Lee, who is known as a Japan expert, didn’t disclose more details about the talks as he left Abe’s office.
Relations have worsened since Japan in July tightened export controls on key high-tech materials used by South Korean manufacturers. Tokyo cited unspecified security concerns, but Seoul called it retaliation for its courts ordering Japanese companies to compensate Korean laborers for abusing them during Japan’s 1910-1945 colonization.
Japanese lawmakers and officials have singled out the South Korean court rulings that would freeze the Japanese companies’ assets held in that country, where more than a dozen similar lawsuits are still pending.
The trade spat has also spilled over to security issues. South Korea in August announced a decision to terminate a bilateral military intelligence sharing pact despite North Korea’s resumption of missile tests over the last several months, triggering Washington’s concern. The pact is set to expire in late November.
Japan maintains all compensation issues, including those of South Korean women who were held as sex slaves at front-line brothels for Japanese soldiers, were settled under the 1965 bilateral treaty under which Tokyo provided $500 million in economic cooperation.
Abe, in his meeting with Lee, reiterated Japan’s position that South Korea should keep its promise, referring to the 1965 agreement.  Mari Yamaguchi, Tokyo,AP