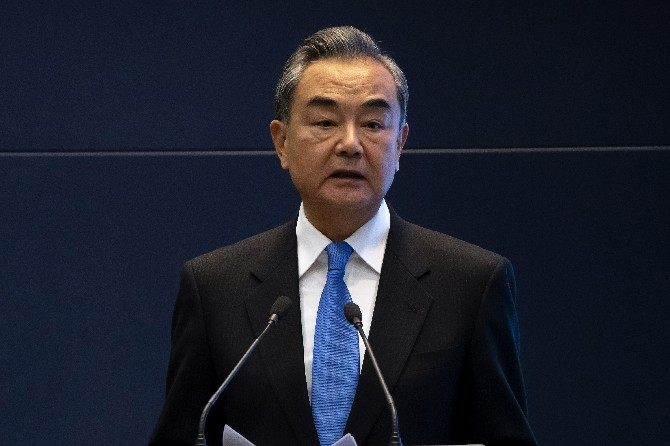 Chinese Foreign Minister Wang Yi will meet with Taliban representatives during a trip this week to the Persian Gulf nation of Qatar, an official said yesterday.
The talks during Wang’s visit, scheduled for Monday and Tuesday, are the latest high-level contact between the sides and will “provide an opportunity to have an in-depth exchange of views on Afghanistan’s situation and issues of joint concern,” Foreign Ministry spokesperson Wang Wenbin said at a daily briefing.
Beijing long opposed operations by U.S. and NATO forces in Afghanistan — with which it shares a narrow border — while benefiting from the relative stability that the presence provided. It has kept its embassy open in Kabul but has not recognized the Taliban as the government of Afghanistan. It has urged the group not to provide a safe haven for Islamic militants seeking independence for the northwestern Chinese region of Xinjiang.
“Since August this year, the situation in Afghanistan has undergone fundamental changes and the Afghan people have a historic opportunity to independently decide the country’s destiny. Meanwhile, however, they still face many difficulties and challenges and are in urgent need of external support,” Wang said.
“As a traditional friendly neighbor and partner of Afghanistan, China always called for dialogue and contact to guide the development of the Afghan situation in a positive direction and help the Afghan people to get over difficulties,” he said.
Wang met with a delegation led by a top Taliban leader, Abdul Ghani Baradar, in July in the Chinese city of Tianjin, shortly before the group seized power from Afghanistan’s elected government.
At that meeting, Wang referred to the Taliban as “a pivotal military and political force in Afghanistan” that is “expected to play an important role in the process of peace, reconciliation and reconstruction.”
China has urged the group to keep border crossings open, while offering $31 million in humanitarian assistance along with 3 million doses of Chinese-made COVID-19 vaccines.
China has previously signed deals for oil, gas and copper mining in Afghanistan, although those have long been dormant.
Chinese officials have called for an inclusive government in Afghanistan but said virtually nothing about the Taliban’s restrictions on women’s access to work and education and other human rights issues. MDT/AP