Afghanistan conflict | Taliban hold talks with US envoy in Qatar 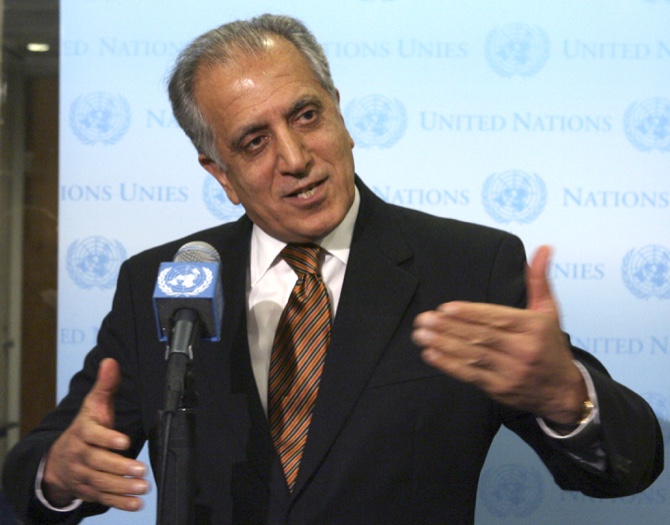 The Taliban have held three days of talks with U.S. envoy Zalmay Khalilzad in the Gulf state of Qatar, where the Afghan insurgent group has a political office, a Taliban official and another individual close to the group said yesterday [Macau time].

Without referring explicitly to the talks in Qatar, Khalilzad told a news conference in the Afghan capital Kabul “I am talking to all interested parties, all Afghan groups… and I think there is an opportunity for reconciliation and peace.”

“The Afghan government wants peace,” he said. “The Taliban are saying they do not believe they can succeed militarily, that they would like to see the problems that remain, resolved by peaceful means, by political negotiations.”

Peace efforts have accelerated since Khalilzad’s appointment as Washington’s peace envoy to Afghanistan aimed at eventually winding down America’s longest war. Seventeen years after the U.S.-led invasion that ended Taliban rule, the militants control nearly half of Afghanistan and carry out near-daily attacks on local security forces and government officials.

The U.S. administration now appears focused on reaching a political settlement with the Taliban, and has given in to a number of the group’s longstanding demands, beginning with the holding of direct talks. The Taliban have long refused U.S. demands to negotiate with the Western-backed government in Kabul, which the insurgents view as a puppet regime.

Pakistan has meanwhile released a number of high-level Taliban prisoners, including the movement’s co-founder, Mullah Abdul Ghani Baradar. The releases are widely seen as a U.S.-directed move aimed at encouraging the Taliban to participate in talks.

Khalilzad said he was “cautiously optimistic,” a peace settlement, which he preferred to call a “roadmap to Afghanistan’s future,” could be hammered out among rival Afghans. What that roadmap will look like and what rights and guarantees it will enshrine, including women’s rights and rule of law, will be a decision for Afghans to make, said Khalilzad.

The United States has spoken “loudly and proudly” for equal rights for men and women, said Khalilzad, but how – or even if – those rights are woven into Afghanistan’s “roadmap for the future,” will be decided by Afghans. Saying he would like to see a settlement “sooner rather than later,” he urged both sides in Afghanistan’s protracted conflict to consider next year’s presidential elections, scheduled for April 20, as the deadline for peace.

The Taliban, who spoke about the talks in Qatar said Khairullah Khairkhwah, the former Taliban governor of Herat, and Mohammed Fazl, a former Taliban military chief, attended the marathon talks. The Taliban spoke on condition of anonymity because they were not authorized to discuss the sensitive negotiations.

A third individual with knowledge of the discussions said the Taliban pressed for a postponement of next year’s presidential elections and the establishment of an interim government under a neutral leadership. Abdul Sattar Sirat, an ethnic Tajik and Islamic scholar, was suggested as a candidate to lead an interim administration.

The individual, who also spoke on condition of anonymity because of the sensitivity of the talks, said Khalilzad wants to reach a settlement within six months, a timescale the Taliban said was too short.  Khalilzad also proposed a cease-fire, which the Taliban rejected, the individual said, adding that there was no agreement on the release of prisoners, opening the Taliban office or lifting a Taliban travel ban.

Khairkhwah and Fazl were among five senior Taliban members released from the U.S. prison at Guantanamo Bay in 2014 in exchange for U.S. Sgt. Bowe Bergdahl, who was captured by the Taliban after walking off his base in Afghanistan in 2009. The five are now based in Qatar, and are seen as having enough stature to sell a peace deal to insurgents fighting on the front lines.

President Donald Trump harshly criticized the 2014 prisoner exchange, and in a speech last August pledged to send in additional U.S. forces and redouble efforts to defeat the Taliban. But that strategy has had little if any impact on the ground, with the Taliban keeping up a steady tempo of attacks and an Islamic State affiliate carrying out massive bombings targeting minority Shiites.

Khalilzad has been touring the region in recent days. In meetings in Kabul, Khalilzad is expected to press Afghan President Ashraf Ghani to cobble together his own negotiating team, which could prove difficult given the deep divisions within the government. Kathy Gannon, Islamabad, AP