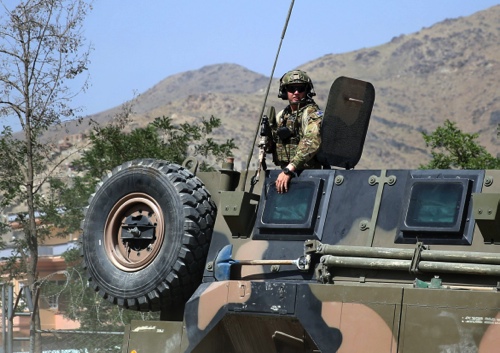 A man dressed in an Afghan army uniform opened fire yesterday on foreign troops at a military base, killing at least one NATO soldier and wounding 15, including a German brigadier general, authorities said.
Details about the attack at Camp Qargha, a base west of the capital, Kabul, remained unclear. Gen. Mohammmad Zahir Azimi, a spokesman for Afghanistan’s Defense Ministry, said a “terrorist in an army uniform” opened fire on both local and international troops. Azimi said the shooter had been killed.
Germany’s military said one NATO soldier was killed, while 15 NATO soldiers were wounded. The wounded included a German brigadier general, who the German military said was receiving medical treatment and was “not in a life-threatening condition.”
In its statement, NATO said that it was “in the process of assessing the situation.”
Qargha is known as “Sandhurst in the sand,” as British forces oversaw building the officer school and its training program. In a statement, the British Defense Ministry said it was investigating the incident and that “it would be inappropriate to comment further at this time.”
The attack comes as so-called “insider attacks” — incidents in which Afghan security turn on their NATO partners — largely dropped last year. In 2013, there were 16 deaths in 10 separate attacks. In 2012, such attacks killed 53 coalition troops in 38 separate attacks. AP